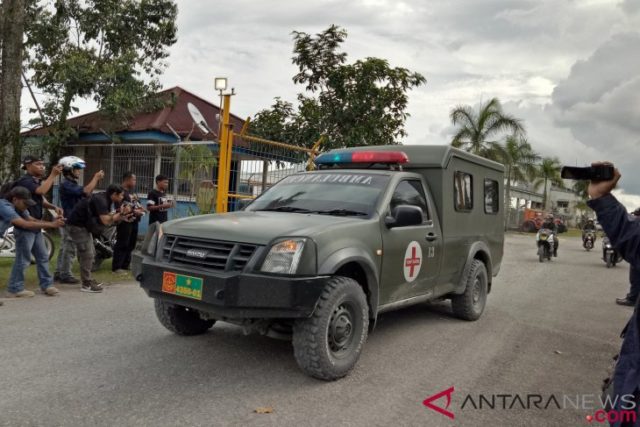 The helicopter landed at the Mozes Kilangin Airport here at 11:40 a.m. local time.

The bodies, placed in three body bags, were transported aboard an ambulance to a location near the airport for undergoing the identification process by the Indonesian Police`s forensic team.

The Army helicopter will make another trip to move the remaining eight bodies of the slain workers.

Earlier, Com. Gen. Sukmanto had confirmed on Wednesday that 22 people were killed in an attack by the outlawed armed criminal group in Nduga.

He said 21 of the victims were civilians, who worked in the construction of the Kali Yigi bridge of PT Istaka, while another one was a military member, Second Sergeant Handoko.

A joint team of the TNI and Polri found the location where 16 construction workers were murdered by the armed criminals.

The officers have taken full control of the Mount Kabo area, where tens of workers of PT Istaka Karya were butchered while they were building bridges and roads expected to improve connectivity in the country`s easternmost province.

On Thursday morning, eight survivors of the terror attack in Nduga arrived in Timika.

The survivors comprise seven men and a child. One of the men was rushed to the Mimika regional public hospital for treatment of his injuries.

The Army helicopter evacuated the survivors from Nduga to Timika. The helicopter landed at the Mozes Kilangin Airport in Timika on Thursday at 10:50 a.m. local time.

Marshal Tjahjanto and Com. Gen. Sukmanto personally greeted the survivors upon their arrival at the airport.