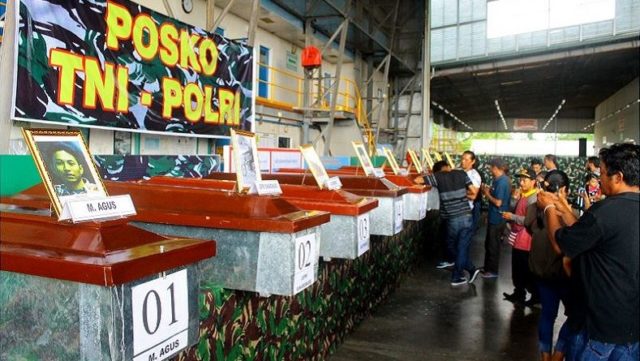 Makassar, Sulawesi, (ANTARA News) – Bodies of 16 victims killed by an armed criminal group in Nduga, West Papua Province, were flown to the Hasanuddin Air Force Base in Makassar in South Sulawesi on Friday for burial.

“Of the total, (the bodies of) 14 will be dropped at the base, while the other two would then be taken to Jakarta,” Major Sus Henny Purwanny, the spokesman of the base, stated.

The coffins were expected to arrive at 6:06 p.m. local time aboard Hercules Alfa 1331 of the Air Force.

All bodies have been identified.

While responding to a query on whether a military ceremony will be held, Cahyanto said it had yet to be confirmed based on the decision of the commander.

“We will see the schedule, if the ceremony will be held. We are now preparing everything needed for the arrival of the coffins,” she noted.

The joint TNI and Polri team has, so far, discovered 16 bodies of slain workers employed by the PT Istaka Karya construction company.

The team managed to evacuate eight survivors and move eight bodies from Nduga to Timika, Mimika District, on Thursday.

Jimy Aritonang, one of the survivors, recalled that some 50 armed men belonging to an outlawed group, led by Egunius Kogoya, had taken 25 workers from the camp to Mount Kabo.

On arriving in the remote mountainous area, the criminals shot the workers, whose hands were bound. Some 14 men died on the spot, while 11 others pretended to be dead and later attempted to escape. However, five were later recaptured and killed by the criminals, while several others managed to reach a military post.

The criminals chased them until the military post and got engaged in a shootout with the officers. One military officer, identified as First Sergeant Handoko, was killed in the attack, while another one was injured.