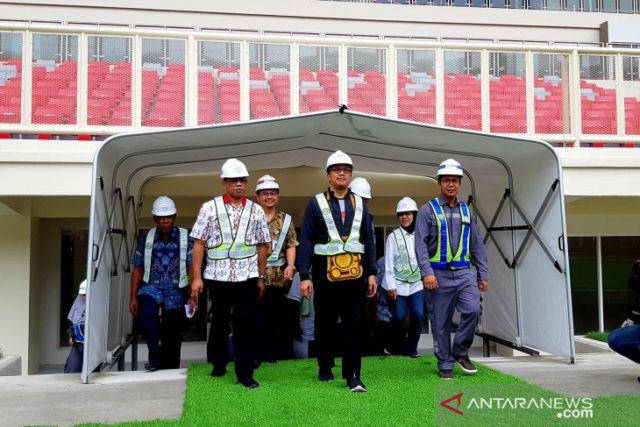 Jayapura (ANTARA) – The Papua Bangkit Stadium is fully built and ready to hold the National Sports Week (PON) 2020, though the venue of the competition, located in one complex, is yet under construction.

“Construction of the stadium is 100 percent complete and is replete with supporting facilities,” Dwi Aji Wicaksono, manager in charge of construction of the Papua Stadium, remarked while delivering a presentation to Youth and Sports Minister Imam Nahrawi in Papua on Friday.

The stadium, to be used for the opening and closing of the four-year championship, has a seating capacity of 40 thousand and can be said to be the second-best Indonesian stadium after Gelora Bung Karno Senayan, Jakarta.

Wicaksono noted that during this time, his side had continued to conduct maintenance of the stadium, which is a matter of pride for the Papuan people since a proposal for which had yet to be submitted to the provincial government. This stadium is expected to be used optimally.

Moreover, the stadium has an interesting design since it draws inspiration from the culture of the Papuan people. The stadium features a closed system and single seat arrangement. The pattern is almost similar to that of Bung Karno Stadium in Senayan, Jakarta.

The “Papua Bangkit Stadium”, which is “Rising Papua Stadium” in English, lies on the edge of the road between Sentani and Jayapura, thereby making it easily accessible. The people of Jayapura have to travel 40 kilometers while for those from the city of Sentani, the distance is just 10 kilometers.

Meanwhile, Nahrawi expressed pride over the completion of construction of the Rising Papua Stadium that would become the largest sports center in the eastern region of Indonesia.

“This venue must be a source of inspiration for other provinces to emulate the same. This is the best after Senayan,” he emphasized.

In addition, the Papua sports complex also has an aquatics arena and a multi-sport arena.