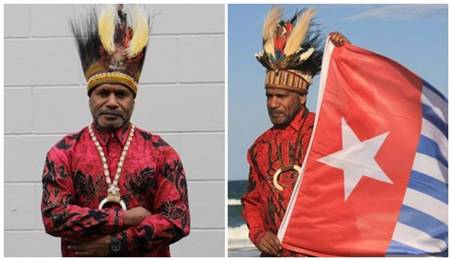 The anti-racism concern that recently occurred has appeared in many parts of the world. It was the #BlackLivesMatter movement that supports Black People against discrimination. In Indonesia, the movement was formed into the #PapuanLivesMatter movement which was cunningly used by Benny Wenda, the leader of the United Liberation for West Papua (ULMWP), to revive the Papua’s spirit of liberation. Benny’s discourses in the interest of his group would remain threatening the conduciveness in Papua which is now growing more conducive and advancing.

Concerning Benny’s actions so far, is it true that he expressed the “Free Papua” for his comrades? or is there something else behind all of his discourses? I have no idea, as a part of the Indonesian island which symbolized as a bird (Papua), I just trying to contribute my thoughts and belief.

On the other hand, Benny Wenda, as the orator of “Free Papua” abroad seems only provides the foreign NGO that wanted to control the wealth resources of Papua. There are so many interests in it. Also, Benny is not a nationalist, he is just an individual who wants to achieve his group’s interests.

Simply, based on the semantics that he brought up in his actions, it is true that he seems like a speaker for Papua’s welfare. He expresses “Free Papua” as if fighting for his comrades and homeland.

Nevertheless, a lot of things seem odd about him behind his actions so far. For instance, he currently lives in England. There, he lived a prosperous life, wearing classy clothes, living in a comfortable and luxurious home. Contrary, how about the people who agreed and provoked by him in Papua, his homeland. For example, the Pro-Liberation armed forces, which now live mostly in the mountains and inland. What do they feel? Do they live comfortably, prosperously, and luxuriously as Benny experienced? Do they eat foods as delicious as Benny’s in England?

Based on some anomaly above, maybe we should think clearly about what Benny had done. Perhaps he is just a smart actor who takes advantage of the situation occurs. Imagine, if it is true what he has been doing all this time is sincere, why is he still able to live comfortably behind the difficulties of his comrades? why is he still wearing classy clothes, living in a prosperous and luxurious while his comrades living in distress because of isolating themselves in the mountains?

In my point of view, Papua is getting better and more advanced than before. If there are still shortcomings, it is a natural thing because building a large country is not easy. It takes a hard effort. It takes a mental as strong as steel to face all obstacles. Because of that, all the brothers and sisters in Papua, as well as to all citizens of Indonesia, Let us together develop Papua and Indonesia in a better direction! Let us fight brilliantly! Please, do not follow Benny Wenda! Do not imitate the manner of Benny Wenda who lives happily abroad while his fellow citizens are exhausted in their land, Papua.