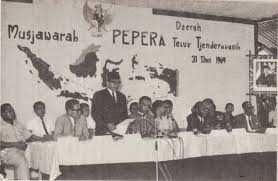 The decision and stipulation of West Irian as the territory of Indonesia’s national jurisdiction was sponsored by the founding fathers of the nation’s at the BPUPKI (Investigating Committee for Preparatory Work for Independence) meeting on 10 to 11 July 1945.

The thing that became the basis in formulating the state framework at the meeting was the theory of spilled blood and also the theory of geopolitics.

According to the theory of spilled blood, the desires and provisions to form the country’s territorial jurisdiction began at the time of the Majapahit Kingdom which was confirmed by the Gajah Mada Governor through the Palapa Oath.

“That the Indonesia must be independent by covering the Malayan and Papua regions, that is all” -Soekarno

Papua part of Indonesia has been stated in the formulation of the BPUPKI session regarding Indonesian sovereignty, which includes Malacca, Borneo, Papua, Timor and the surrounding Islands. This decision was also based on the principle of possidetis juris, which stipulated that the boundaries of a former colony were based on the territorial borders controlled by the colonial government before the colony was independent.

And the proudest are the two native Papuan namely, Silas Papare and AB Karubui, who participated actively in the framework of observing the manuscript of the 1945 Constitution as a constitutional foundation for the basis of the formation of the Unitary Republic of Indonesia.

The unification of Papua into Indonesia’s sovereignty continues to reap the pros and cons of many parties who disagree and want Papua to be separated from the Unitary Republic of Indonesia. Until then as a final step in accordance with the New York agreement on July 14 to August 4, 1969 the Indonesian government held a public opinion determination or PEPERA in 8 West Irian Regencies namely Merauke, Fak Fak, Sorong, Manokwari, Teluk Cenderawasih, Paniai, Jayawijaya and Jayapura.

The implementation of PEPERA aims to determine the validity of the West Irian law status through popular elections based on democratic principles in accordance with the New York agreement, whether to stay with Indonesia or stand alone.

The joining of Papua to Indonesia was reported to the United Nations and through the results of the session it was decided that the resolution resolution No. 2504 dated 19 November 1969 which confirmed the PEPERA results and determined and recognized that the Papua region was an integral part of the Unitary Republic of Indonesia.

The successful implementation of PEPERA is the result of a unified effort of all Papuans as part of the Indonesian family that stretches from Sabang to Merauke based on Pancasila and the 1945 Constitution.

Papua as an integral part of the Unitary Republic of Indonesia is final, absolute and has permanent legal force in accordance with aspects of national law and aspects of international law.

Therefore, based on historical facts and realities, Papua is actually a fellow brother who is an inseparable unity in the life of the nation and state in the Republic of Indonesia that we love together.