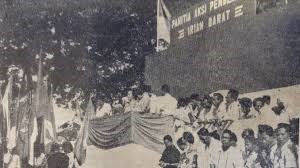 I write this article because many Papuans youths get the wrong understanding of the Determination of People’s Opinion or usually called the PEPERA in 1969. The discourse about PEPERA, which said illegal because of various practices that contradicting human rights, as well as regarding the international law standards (one man one vote), is masterminded by foreign parties. It is part of foreign efforts to separate Papua from the Republic of Indonesia.

Whereas, if the aspect of human rights put forward, which one is more crucial: breaking away from the invader or practical democracy of one man one vote? We should realize that democracy can only be enjoyed if the invaders have been successfully expelled. No democracy in the colonized territory. But the point is that we have succeeded in expelling invaders from our territory, and the 1969 PEPERA is an affirmation that the Papuans are Indonesian.

Why it is need affirmation? Because the Dutch did not want to lose their control in the former territories. It did not want to let go of Papua for any excuses. Those excuses are then transformed into the minds of our young Papuans today.

The Proclamation of Indonesian Independence on August 17, 1945, covers the territory that was colonized by the Netherlands (the Dutch East Indies). The area is from Sabang to Merauke.

It was not an easy task for Soekarno and other founding fathers at that time to organize the newly independent country. The Dutch, which had occupied the country for hundreds of years, was reluctant to release it in a short time. So the handover of authority over the proclaimed territory was carried out in steps by the Dutch to the Government of Indonesia. Remember the Linggarjati negotiations in Kuningan, West Java on 11-12 November 1946, and the Renville Agreement on 17 January 1948.

At that time, security disturbances continue to occur in many areas. There were also disturbances from neighboring Malaysia, as well as internal rebellions. (We can read the details from the autobiographical books of historical actors). Under these conditions, the Papua region was almost untouched, so that the Dutch seemed easy to plant its power. But the community of the international world at that time seems not to be in favor of the invaders. World War II has changed everything. Many nations in Asia and Africa have proclaimed their independence from colonialism.

Naturally, the existence of the Dutch in Papua increasingly disrupted. Coupled with Indonesia’s diplomacy efforts that earned the strength of the Asia and Africa community, also the war equipment support from Soviet, made the Dutch even more desperate. Under such conditions, the Dutch hurriedly formed the Papuan National Council and the army of Papuans. The aim is to prepare for the formation of a (puppet) state of Papua. Did the Dutch succeed?