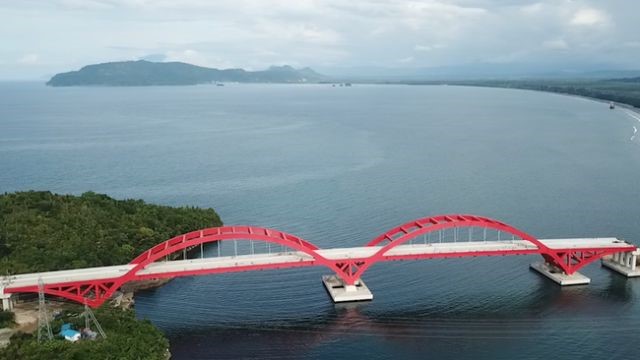 The inauguration of the Holtekamp bridge or Youtefa bridge which spent up to Rp1.8 trillion by President Joko Widodo accompanied by the Minister of Public Works and Public Housing (PUPR) Basuki Hadimuljono, Deputy Minister of PUPR, John Wempi Wentimpo, Minister of Home Affairs, Tito Karnavian, and Minister of Transportation Budi Karya Sumadi, and the Governor of Papua, Lukas Enembe, is a strong proof of the love from the central government, which is currently led by President Joko Widodo and Vice President KH. Ma’ruf Amin to Papua. It also proves the determination that “Indonesia is Papua and Papua is Indonesia”.

The construction of the Holtekamp bridge also confirmed that President Joko Widodo (Jokowi) had a strong commitment to developing Papua from the start. However, the heavy terrain makes the development of the region in this eastern tip of Indonesia not easy, because development in areas with difficult geography such as in the central mountainous area of ​​Puncak Jaya, Puncak Lani Jaya, Nduga, Yahukimo, and the western central mountains include Waniai, Intan Jaya, Dogiyai, and around Mimika. On the other hand, this does not close the eyes of President Jokowi who already understands that the problem facing the Papuan people today is equitable development and prosperity so that President Jokowi will continue to build infrastructure in Papua.

“The Papuans are grateful for the results of the current development. Many are optimistic that the Papuan people can be patient with the government’s efforts to advance the Cenderawasih Earth, even though there are disturbances from armed groups who are not in line with the government.”

The Holtekamp Bridge or Youtefa Bridge has been built since 2015. During its construction, this bridge won a record from the Indonesian Record Museum, namely the record for the installation of the longest intact steel-frame bridge. This bridge is said to be the New Icon of Papua which connects Jayapura directly with the Skouw State Border Area. This bridge can shorten the distance and travel time by about 70 minutes from Jayapura City to Muara Tami District and the Skow Cross-Country Border area. It should be noted that Muara Tami District is an area where the State Palace is planned to be built in Papua.

Meanwhile, the Deputy Minister of Public Works and Public Housing (PUPR) asked all parties to maintain the Holtekamp Bridge in Papua by maintaining cleanliness and maintaining the bridge, especially the cleanliness of the betel nut which can make this bridge look dirty and unkempt. He said that the construction of the New Icon of Papua was one of the government’s commitments to build infrastructure in the Eastern Indonesia region.