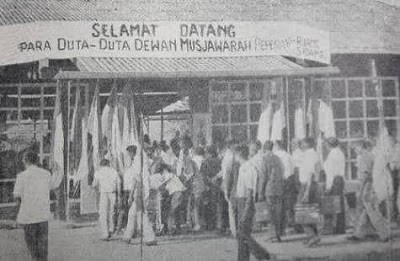 Indonesia’s attempt to reclaim West Irian is not an easy struggle. However, it has become a commitment of all elements of the nation to defend their sovereignty by all means and risks. Apart from political diplomacy through the negotiating table, the Indonesian government has prepared all the potential of the people and the Armed Forces through the Trikora command on December 19, 1961, to reclaim West Irian. The slow-going reintegration of West Irian cannot be separated from the tricky attitude of the Dutch to control West Irian.

The political negotiations at the Round Table Conference (KMB) in August 1949 the Dutch recognized Indonesian sovereignty over all of the former Dutch colonies, but West Irian was the exception. The Netherlands stated that the transition to West Irian would take place 2 years later after the KMB, which was again denied by the Dutch. The Netherlands again launched its divide et empera strategy by establishing the Papua National Council and making it a puppet state to fight its nation. This move sparked all the anger of the Indonesian people and brought the Papuan problem to the brink of the 1961 military confrontation.

“Papuan people have realized that pepera is the will of the people, who say that it is engineering is an interest group that does not like the government”

Indonesia’s firm stance immediately received a response from the international community. The negotiations facilitated by the United Nations between the two parties resulted in the New York Agreement on August 15, 1962, which stated that West Irian

was in the status quo under the supervision of UNTEA / PBB before being handed over to Indonesia. Also, the reintegration issue of Papua will be held through a referendum / Pepera to ask the opinion of all the people of West Irian regarding their status to return to Indonesia. The implementation of the Act as a political decision witnessed by the international community itself was then held in 1969 under the supervision of the United Nations and was attended by all representatives of the tribes in West Irian and proceeded democratically and reflected the desire of the majority of the Papuan people to rejoin the Republic of Indonesia.