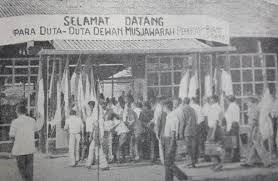 The same thing was done before by the Dutch to the Moluccans. The Dutch brought thousands of Moluccans to their country with the bait of helping the independence process of South Maluku (RMS). But what happened later, the existence of Moluccans in the Netherlands instead became a thorn in the flesh for the Dutch themselves until now.

This is similar to what the Japanese had done before. It formed an organization to prepare for Indonesian independence, which we know by the name PPKI or in Japanese Dokuritsu Zyunbi Tjosakai. This body was formed on April 29, 1945, and its officials were officially inaugurated by the Japanese occupation government on May 28, 1945. But history concluded otherwise, the independence of the Republic of Indonesia was not due to the “goodness” of the Japanese, but the result of the bloody and tearful struggle of our people.

The 1961 Papuan People’s Congress which claimed to be a valid basis for the Papuan people to form their government has not yet been recognized internationally. On the contrary, western countries that won World War II, such as the United States, Britain, etc., recognized the Indonesian Government’s claim to use the 1931 Dutch East Indies Map where Papua was placed under the control of the local Dutch East Indies government with Ambon as the capital. That means, the Indonesian government’s claim is more legitimate in international law than the Dutch effort to separate Papua by pushing the 1961 Papuan People’s Congress. The Pepera 1969 was just a “democratic” attempt involving the Papuans groups to legalize the unification after the Dutch, with all its tactics and strategies, tries to trick the agreements it has made and agreed on itself.

This is in line with the explanation of Papuan researcher from Indonesian Institue of Science (LIPI), Muridan Wijoyo, who explained that the Pepera was held to carry the order of the New York treaty in 1962, which states that to ensure whether Papua is part of Indonesia or not must be done by the act. The Pepera was attended by around 1025 Papuan representatives. Pepera was held in several districts including Jayapura, Biak, and Merauke. Based on the results, all representatives said they wanted to join the Republic of Indonesia.

“The results of the 1969 Pepera were later recognized by the United Nations and a resolution declaring Papua a legitimate part of the Unitary Republic of Indonesia was published. This resolution was also approved by 80 UN states member and only 20 countries abstained,” Muridan said.

Once again, before there was Pepera, Papua already in Indonesia. Pepera was held because of the stubbornness of the Dutch who were reluctant to leave Indonesia. And Pepera was the result of the New York agreement that to ascertain whether Papua was part of Indonesia and it was proven that the Papuan people were not affected by Dutch deception.