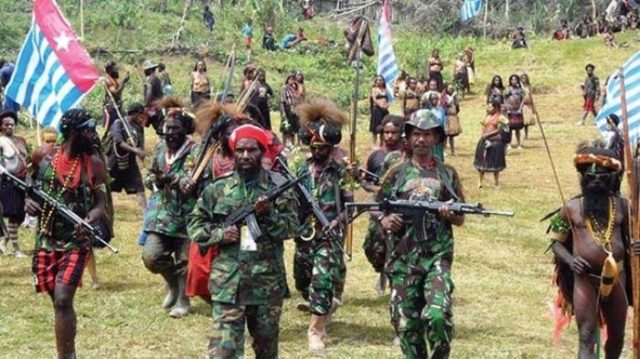 Of course, we cannot forget that on December 1, 2018, the serious human rights violations by the Armed Separatist Criminal Group (KKSB) OPM rebels, whereas many as 31 civilians died because of being hit by bullets from the KKSB. The victims were infrastructure project workers who were working on the construction. Apart from victims from among the immigrants, the attacks by this group also resulted in the death of victims from indigenous Papuans. The massacre of PT Istaka Karya project workers who were building bridges on Kali Yigi and Kali Aurak.

If we examine the OPM KKSB issue, certainly they are not fighting for Papua. They are only a handful of people who claim to defend Papua but are being used by other parties or they could be foreign parties or foreign interests. More precisely, the KKSB OPM is a traitor to the nation and a traitor to Papua. They always make a peaceful Papua full of threats and chaos.

KKSB OPM itself has long been a separatist organization and has even tried to break away from Indonesia since the early days of joining the Republic of Indonesia, but not only about that, but threats and lecherous actions that have been inscribed by the group led by Egianus Kogoya.

The group only wants to disgrace fellow children of the nation. The treason they committed has undermined the peace in Papua. Whether they move on their own or have been used by foreign parties, what is clear is that the KKSB OPM has carried out much underground propaganda via the internet to gain international sympathy by exploiting human rights problems in Papua. The fact that the OPM KKSB itself has committed serious human rights violations so far.

We should ask human rights activists who defend the Separatist KKSB OPM who have been proven to have committed human rights violations so far.

Responding to the OPM KKSB anniversary, the Papuan people rejected the planned anniversary. Those who reject this agenda also ask law enforcement officials to take firm action against groups that will carry out the KKSB OPM anniversary activities, because this is contrary to statutory regulations and can cause unrest in the Papuan community.

The OPM KKSB is proven to be inconsistent with the ideology of Pancasila and Human Rights, they have been proven to be brave enough to attack fellow Papuans and to massacre tribal racism just because it is not following the thoughts of the OPM KKSB regarding the liberation or referendum.

The atrocities committed by the OPM KKSB have also gone too far, so the security apparatus needs to take firm action if the KKSB OPM again acts of gross human rights violations.