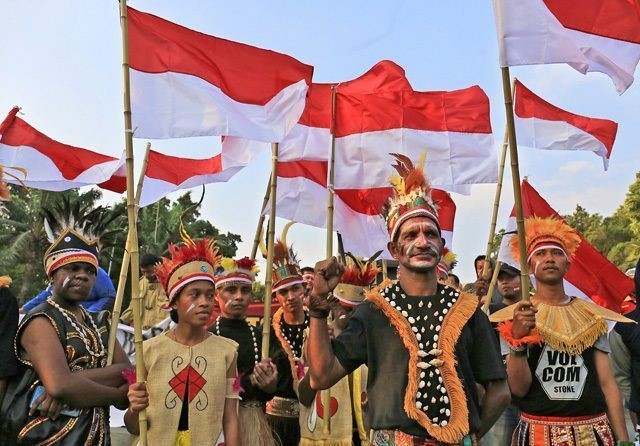 In the 4th century, Srivijaya Kingdom evolved into the largest Buddhist kingdom at that time. Later, in the 8th century, the Srivijaya Kingdom began to have direct contact with West Papua, the Srivijaya Kingdom proved to have sent cassowary birds of Papua as a gift to the Kingdom of China (Singh, 2008). Later, when the Majapahit Kingdom came to power, West Papua was part of the Majapahit Kingdom under the Negarakertagama Book. It was stated in the book that West Papua was the eighth region under the rule of Majapahit. Moreover, the book also mentioned several areas of West Papua such as Wwanin and Sran,  which in the present is known as Onin (located in Bintuni Bay), and Kaiwa (located in southern Onin) (Singh, 2008) When Islamic sultanate came to power, Papua was under the rule of Tidore Sultanate. Papua was included in the trade federation established by the Tidore Sultanate, later in 1570 the majority of West  Papuan coastal areas had become an administrative part of the Tidore Sultanate. (Singh, 2008)

West Papua has been a part of Indonesian Archipelago since the administration of Srivijaya, Majapahit, and Tidore Sultanate.

Apart from the historical relationship, West Papuans have relationships and similarities with Indonesian tribes who lived outside Papua as well. West Papuans which are categorized into Melanesian or Austrolomelanesoid race spread around Maluku, Sulawesi, Flores, Alor, Sumba, South Borneo, and some areas in southern Java as well. Evidence of the existence of Austrolomelanesoid was found in several caves on Mount Sewu in southern Java; Mount Batubuli in South Borneo; Liang Toge, Liang Momer, Liang Panas in Flores, and Golo Caves in Maluku; and in the Aceh-Sumatra eastern coast (Dwi Umar, 2016).  In fact, around Maros-Pangkep, South Sulawesi, some researchers found an early Australomelanesoid skeleton. The discovery of the skeleton was supporting evidence of Toala culture. A similar finding can also be found in Minahasa, North Sulawesi.