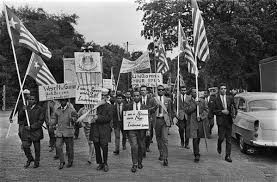 The Round Table Conference (KMB) negotiations in Den Haag in 1949 reached an agreement on the official transfer of sovereignty to Indonesia and in particular the handover of Irian would be “postponed” for one year. When Indonesia demanded this surrender, the Dutch interpreted “postponed” which meant renegotiated. Since then, relations between the Netherlands and Indonesia have been heating up.

The Dutch did not want their territory to fall into Indonesian hands. Since 1946, the Netherlands has tried to make various regions in Indonesia as a federal state under the Dutch Union territory. More than that, the Dutch wanted to make West Irian a shelter for Indo-crossbreed living in Indonesia or Dutch citizens living in Europe. However, this plan did not go smoothly.

The agreement stated that the Dutch must leave no later than May 1963. After the handover from UNTEA UN to Indonesia in May 1963 at a giant meeting in Merauke, West Irian which was attended by the Governor of Aceh, Hasjimi, and the first Governor of West Irian, E.J. Bonay.

West Irian does not automatically become part of Indonesia. The New York Agreement mandated the Indonesian government to conduct a determination of people’s opinion (Pepera) in West Irian, no later than the end of 1969 with the choice of joining Indonesia or becoming independent.

On the way, the people of Papua show evidence to the world that they have the right to self-determination. Self-determination was carried out under UN supervision through the 1969 Pepera.

In the Pepera it is impossible to do “one man, one vote” so that it is represented by community leaders or tribal leaders. This is due to transportation factors and there are still many remote areas in West Irian. This fact was understood by the United

Nations in a session on 19 December 1969, confirming the results of the Pepera to resolution number 2504, with 84 countries agreeing, 30 countries abstaining and not a single country opposing. So in international law, Irian Barat is legally part of the Republic of Indonesia.

Papuan people have equality with people in other regions, even the government is very concerned about being left behind in Papua. immediately make improvements in all sectors. Papua gets special attention from the central government such as special autonomy, health insurance, and educational facilities, equality, tolerance, and mutual respect are tangible manifestations of everyday people’s behavior in Papua, but this peaceful situation is sometimes disturbed by a group of irresponsible people. , for personal interests, position and to enrich themselves and their groups