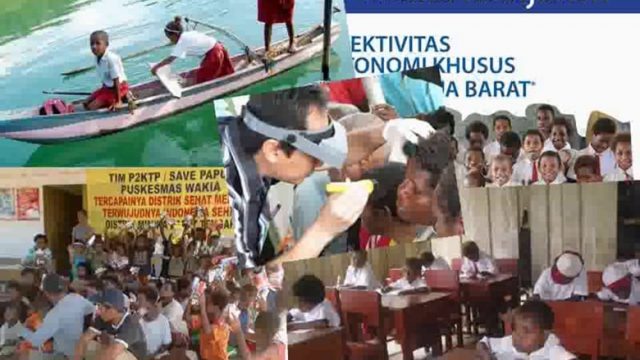 Building Papua is building Indonesia. On this land located at the eastern end of Indonesia, the government continues to make Papua land a development priority, especially since the issuance of Presidential Instruction Number 9 of 2017 concerning the Acceleration of Welfare Development in Papua and West Papua Provinces.

Driven by strong enthusiasm and commitment, from 2001 to 2019, the acceleration of development carried out by the government in Papua through increasing access and quality of basic services as well as economic development through downstreaming of superior commodities has been continuously carried out.

Not only have various regulatory instruments been formed, to support the implementation of accelerated development in Papua, the government has prepared five main areas to support development programs in the region. The five main areas include education, health, people’s economic empowerment, infrastructure development, and human resources.

In addition, the implementation of the accelerated development of Papua will be carried out holistically. Holistic development needs to be done because the Papuan people need logistics and development like those who live outside Papua, especially in Java.

However, one of the five main areas in support of development programs in Papua, namely human resource development in Papua and West Papua, has made some progress. The results of the government’s hard work for five years had an impact on increasing the Human Development Index and reducing the poverty rate. The Human Development Index (HDI) for Papua in 2014 was at 57, increasing to 60 in 2019. In West Papua in 2014 it was 61 and 64 in 2019.

The government also provides access to light at night. So to make it happen, the government has prepared 35 thousand MW of generators, hundreds of kilometers of cable transmission cables connected and for the people in the interior, Energy Saving Solar Lights are presented.

Papua and West Papua also enjoy advances in information technology as a result of the equal distribution of internet quality improvements evenly throughout the region through the Palapa Ring policy.

In addition to the several achievements that have been described, in order to support the acceleration of development in the land of Papua, the government has issued Presidential Regulation Number 17 of 2019 concerning Government Procurement of Goods / Services for the Acceleration of Welfare Development in Papua and West Papua Provinces to increase empowerment of indigenous Papuan entrepreneurs. This is a revision of the previous Presidential Regulation Number 84 of 2012. After the revision, this Presidential Regulation provides a number of facilities and special treatment for the procurement of goods and services that support efforts to accelerate the development of the welfare of the land of Papua.

Not only that, the Special Autonomy (Otsus) funds for the Provinces of Papua and West Papua which are sourced from the General Allocation Fund (DAU) of the State Budget which should be terminated in 2021 according to Law Number 21 of 2001 will be recommended by the Supreme Audit Agency (BPK). at the beginning of 2020 to be extended so that development can continue in accordance with the five development priority programs in Papua and West Papua.