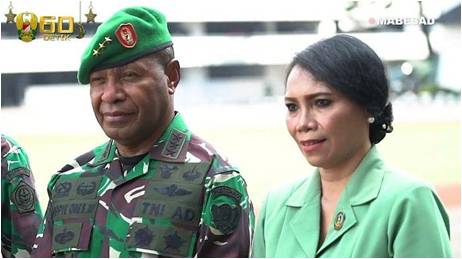 Topics about Papua Land are always interesting to discuss. Apart from the abundant natural wealth in the mining sector, the social and cultural characteristics of eastern Indonesia have their own exoticism.

Papua is a part of the Republic of Indonesia (NKRI) is a fixed price. President Joko Widodo himself repeatedly emphasized that there is no difference between Papua and other regions in Indonesia. For this reason, the President is committed to building and prospering the Papuan people.

Evidence of the government building and prospering Papua is by building infrastructure in Papua. Call it Trans Papua and Youtefa Bridge. A commitment that deserves thumbs up because, according to the President, infrastructure development reduces inequality between Java and Papua.

As state servants, these generals were known to be loyal and intelligent. Not surprisingly, these generals occupied a number of important positions in the military and the police.

Rear Admiral Freddy Numberi, who was born in Yapen Waropen, West New Guinea (now Papua), on October 15, 1947, completed his AKABRI education in 1968. He then entered the AAL special education in Surabaya in 1969 and graduated in December 1971. After graduating from AAL he was trusted became Commander of KRI Sembilan in eastern Indonesia, Commander of the Task Force for the Parchim, Frosch, and Kondor Ship Procurement Project for the period 1995-1996. The highest rank in the Navy (TNI AL) is Vice Admiral.

Retiring from the military, Freddy became a politician. In 1998, Freddy was the Governor of Papua. Then in the National Unity Cabinet in the era of President Gus Dur, Freddy was appointed as State Minister for State Apparatus Empowerment.

In the era of President Megawati Soekarnoputri’s reign, Freddy was chosen as the Indonesian Ambassador to Italy and Malta. Then in the era of President Susilo Bambang Yudhoyono, Freddy was appointed be the Minister of Maritime Affairs and Fisheries for the period 2004 to 2009. Freddy’s last position in the government cabinet was as the Minister of Transportation for the period 2009 – 2011.

The second original Papuan general was Lieutenant General TNI (Purn) Joppye Onesimus Wayapai. Joppye who was born in Serui, Papua, July 17, 1962, is an Indigenous Papuan who succeeded in becoming a Military Commander. Joppye graduated from Akabri in 1986 from the Infantry branch. Joppye’s last position in the TNI was Commander of the Army Territorial Center. Previously, Joppye served as Commander of the XVIII / Kasuari Military Area Command.

The third general, Inspector General Pol Paulus Waterpauw. Unlike other generals, Paulus, who was born in Fakfak, West Papua, on October 25, 1963, served in the Police. Paulus is experienced in the field of intelligence. Paul’s last position was the Main Policy Analyst in the Sespimti field of the National Police Education and Training Institute.

Another native Papuan, who chose to serve as a state servant, was Major General TNI Herman Asaribab. In 1988, Akmil held the position of Chief of Staff of the XVI / Cenderawasih Regional Military Command, replacing Maj. Gen. Tatang Sulaiman. The last position that Herman occupied was the Deputy Commander of Seskoad.

Finally, Maj. Gen. Ali Hamdan Bogra. Ali Hamdan is a 1987 Military Academy graduate from the Infantry branch. Alli’s last position was as the Deputy Commander of the Sesko TNI.