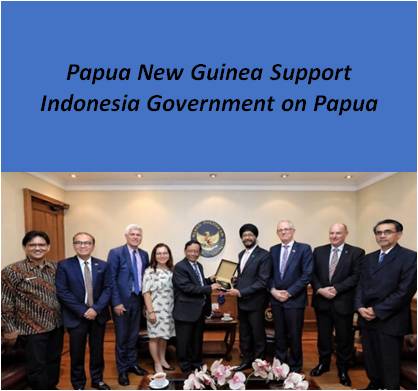 This was evidenced by the arrival of Papua New Guinea’s Minister of Foreign Affairs Rimbink Pato in a bilateral meeting with Foreign Minister Retno Marsudi on the sidelines of the 11th BDF meeting, at the Bali Nusa Dua Convention Center (BNDCC), December 2018. Pato reiterated the sovereignty of Indonesian territory.

Retno Marsudi said Indonesia appreciates the consistency of Papua New Guinea’s stance on Indonesia’s territorial sovereignty. We agree to continue cooperation to strengthen bilateral relations, especially in the economic field because we have a direct border with PNG. we also agreed to develop borders and strengthen people to people contact.

Foreign Minister Pato expressed his appreciation for the invitation to the BDF meeting. He also expressed his condolences for the shooting incident of construction workers in the Yigi District, Nduga, Papua, on December.

On behalf of the people and the Government of Papua New Guinea, Pato expressed his condolences for the death of workers in the construction area. Pato also expressed solidarity with the Government and the Indonesian people and hoped that the perpetrators could be brought to trial for their crimes.

Pato said that maybe there is a problem, but there are ways according to the rules to solve the problem. Indonesia has always received the full support of Papua New Guinea, regarding the borders of the two countries.

“There is no doubt that Papua New Guinea has a consistent position when it comes to Papua and West Papua. We firmly support Indonesia and this is the basis of friendship that emerges from the people and the Government of Indonesia” – Papua New Guinea Foreign Minister Pato

A similar sentiment was also expressed by the Minister for the Pacific issue of New Zealand, Aupito William Sio to Foreign Minister Retno, Sio acknowledging the integral sovereignty of Indonesia’s territory.