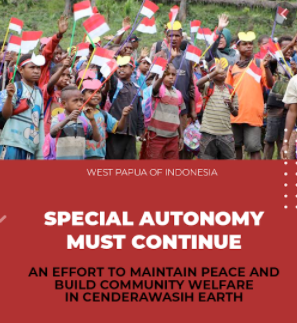 The special autonomy policy for Papua and West Papua provinces has been going on since 2001, in which this Otsus has been running for almost 20 years based on the enactment of Law Number 21 of 2001 concerning Special Autonomy for Papua Province. As is well known, the reason for the implementation of Otsus itself is to accelerate the improvement of the welfare and economic development of the people in Papua and West Papua. Maybe indeed every policy that is issued cannot be separated from its shortcomings, but on the other hand, of course, the policy is made, such as Otsus, which has been running for almost 20 years, of course in some parts it has resulted in the successful impact of the Otsus program for the Papuan people.

From the sources that I have read, the head of the Papua Province KNPI, Alberto G Wanimbo, explained that since the enactment of Otsus in 2001 until now there have been several significant developments in Papua where the success of Otsus must be assessed objectively. Judging from the presence of this Otsus program in terms of health, education, improvement of the people’s economy continues to increase.

As in the field of education, he explained that thousands of indigenous Papuan children have been sent to schools abroad, whether sent to New Zealand, Germany, Australia, the Netherlands, America, China, and Japan. In the Otsus policy, there is a community empowerment program in the villages through a strategic village development plan program (Respek) and infrastructure development that has continued to develop since President Jokowi’s leadership.

And Alberto as chairman of the Papua province KNPI also invited the community to evaluate objectively even though there were many objections, but there was also a success, this needs to be acknowledged by Papuans because Otsus has also been used by the Papuan people, where the success of Otsus has also been partly enjoyed. the community and the Otsus program does not always fail. Besides, the same source still stated that there needs to be a study of the success of Otsus for 20 years in Papua so that the successes and failures can be measured according to what the Papuan people feel is clear and the suggestion is that it is necessary to add that a plan to present special autonomy by the central government needs support because what was changed was not the Special Autonomy law, but the distribution of the Special Autonomy fund that was changed.

From what I have mentioned, what I have read from sources as well, indeed, the Otsus policy in Papua has not completely failed. If we talk about its failure, I think maybe there is something wrong with the direct implementation system in the field, not from the Otsus policy itself. In my opinion, the failure of Otsus is a failure together. The intended failure is in the ranks of his government. Because in my opinion, this program must be applied evenly and carefully so that there are no mistakes when it is done. Usually, this happens because the ranks of the government, such as the provincial government, have not maximally provided guidance and supervision of regencies-cities and from sources that I have read, there is no grand design target for the next 10 or 20 years.

Apart from that, the problems of Otsus so far can be seen from the factor of the allocation of Otsus funds to districts and cities which changes every time the governor changes, which creates uncertainty regarding the allocation and distribution of these funds. In my opinion, one of the keys to the success of Otsus is its good implementation by the government in the Papua region, which has been assigned and is responsible for managing it.

I read a source regarding the practice in the field that occurred in Papua regarding its special autonomy policy that in the education sector there are still many recipients of the program specifically for Papuans from the lower middle class, but in practice, there are many children/families of officials who get the scholarship in question. Then, in the health sector, the policy of cheap or free health programs does not only apply to Papuans but generally applies. And in the economic sector, until now there has not been a single special market for Papuans that was built using special autonomy funds. Mama Papua Market in Jayapura and Sahara Sentani Market was built using funds from the Center. The Mama Papua market, which he said was for mama Papua, was inaugurated after part of the floor was given to other parties.

So that’s what I have said above and in my opinion that the key is all the roles of the Papuan government and the central government, where their role is very important in solving problems in their field, which is different from indirect policies. Because the problem may exist within the ranks of the regional government, such as certain bad actors who do this for the benefit of the group, or maybe there are in the ranks of the central government doing the same thing. Therefore, it is very necessary to take responsibility for one another if this happens, one has to be firm to reprimand or even give sanctions to the evil elements that harm the Otusus program itself.

I would also like to add at the end, that I only took a few points which in my opinion might be a special note that could later improve an Otsus program itself, namely through dialogue with Papuans. I have read in several sources that the government must have implemented this, but what remains the question is the reason why the dialogue has not had any significant results. So in my opinion, I feel that perhaps from the dialogue there is a lack of respect and understanding towards the Papuan people which makes the Papuan people unable to accept, for example, there are some observers who say that in the Jakarta area, infrastructure development is beneficial and very helpful for Jakarta residents, so not Papuans, they prefer if in terms of human resources to be built because in Papua itself if the infrastructure was built, which was originally planned to develop the Papua region.

However, I consider this method wrong or inaccurate because it is better to develop its human resources first, which in the future if it develops well, of course, I believe Papua can be able to manage and feel all forms of development that exist there and feel that the area belongs to it unlike now what I see are mostly people from outside who take advantage of this in Papua. That is why managing the Special Autonomy Fund should not be playing games. There must be proper supervision so that it is not misused.