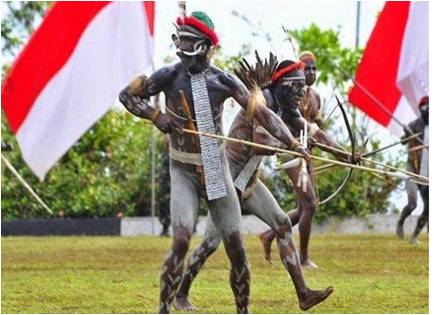 Papua is an integral part of independent Indonesia since the meeting of the Preparatory Committee for Indonesian Independence (PPKI) on August 18, 1945, the day after Sukarno-Hatta proclaimed Indonesia’s independence, on August 17, 1945. The Papua region is generally an area which rich in biodiversity, with various natural resources, tribes, and languages. Besides, from a geopolitical position, Papua borders countries that have potential economic power starting from the Philippines in the north, which spreads to Hong Kong, Taiwan, Japan, to the Pacific Islands and the American continent to the east while in the south it faces Australia. Seeing the wealth of natural resources and the strategic position of Papua, of course, this region is quite attractive to investors to develop the economy in the area.

However, in reality, the condition of the Papua region is still not fully developed, this is due to the unstable socio-security conditions due to the continued development of separatist movements in the local area, which are spearheaded by none other than the West Papua National Committee (KNPB), the United Liberation Movement for West Papua (ULMWP), Papuan Student Alliance (AMP), etc. The problem of gunfire between security forces and separatist groups as well as the rejection of pro-NKRI groups against separatist groups has resulted in the investment and development process in Papua not developing optimally. This of course has resulted in the development of the economic-social aspects of Papua not developing effectively or in synergy with the government’s work program.

Until now, the separatist groups that have been actively advocating for independence for Papua are none other than the three organizations mentioned above. They support the Melanesian Spearhead Groups (MSG), some of whose members are Oceania countries that support Papuan separatists. According to the organization, the United Liberation Movement for West Papua (ULMWP) is a representative forum for the Papuan people formed by the unification of factions fighting for Papuan independence which was carried out on 1-4 December 2014, to uphold West Papuan sovereignty to return to the Melanesian family. Also, this pro-Papuan independence group has always questioned the presence of the Indonesian government at the MSG, because the regional bloc is claimed to have been founded in the interests of the Melanesian states and the Melanesian people who fought for independence from the colonies.

To give a real picture the MSG and its allies intend to support an independent Papua, they are using the issues of democratization and human rights as tools to pressure Indonesia to give a reference to Papua. The elements in the MSG maneuvered, along with several other pro-independent Papuan elements, to bring the issue of Papua to the international forum. Internationalize the issue of Papuan independence and the right of the Papuan people to determine their destiny. For example, some time ago the Indonesian government was surprised by the ULMWP’s maneuver that wished to become a member of the MSG, even though they were not recognized as a country. They can even be categorized as separatists. Several civil organizations in Papua later mobilized and mobilized the masses to carry out political pressure for ULMWP to become permanent members of the MSG.

If you examine this step, it is clear that the movement to internationalize the issue of Papua is still quite intensively carried out by some pro-independent Papuan elements, both at home and abroad. This was further strengthened by the latest developments when the KNPB urged ULMWP to become a full member of the MSG, even stating that this wish was purely the wish of the Papuan people. They demanded Papua be free from Indonesian colonial rule,

However, try to take a closer look at the phrase used by the KNPB, “Demanding freedom from Indonesian colonial rule.” A statement that is very wrong because Indonesia is not a colonizer. During the Determination of People’s Opinions (Pepera) 1969, the majority of Papuans chose to join the Republic of Indonesia. Pepera itself is supported by the United Nations and 82 countries agree that Papua is part of Indonesia. This is a form of distorting history and distorting the wrong public opinion of the separatists.

Papua is part of the Republic of Indonesia. That fact should be understood by the public

Groups, such as KNPB, AMP, especially ULMWP, do not understand the ideology of Pancasila and the 1945 Constitution. Their efforts to lead to the international opinion that Indonesia is a colonizer is completely irrelevant to historical facts, let alone international law. This movement also received resistance from the Papuan people themselves. This can be seen from the action of thousands of residents of Jayapura City (using 13 trucks, dozens of minibusses, and motorbikes) who are members of the People’s Defenders Front of the Republic of Indonesia (Bara NKRI), consisting of a combination of ethnic and religious groups, demonstrating against anti-Indonesian groups in Trikora Abepura Field, Jayapura, Papua some time ago.

That is why Papua is part of the Republic of Indonesia. That fact should be understood by the public. The pluralistic nature of Indonesia should be a strengthening factor for the unity of society. The lack of understanding and implementation of “Bhineka-Tunggal Ika” by separatists and other pro-independence groups has caused them to feel divided according to ethnicity, race, and religion. This is certainly not following the purpose of the “Founding Fathers” in establishing NKRI. The Republic of Indonesia is built based on differences, so being different is natural in Indonesia.

As a sovereign country, all Indonesian people should work together with each other, support the realization of the unity and prosperity of the nation, not the other way around that it disturbs the creation of the integrity of the Republic of Indonesia. Given this, it will not produce positive results but negative results, which in turn disrupt the development of the socio-economic aspects of the local area, as it is today.

The issue of independence that continues to be disseminated by the KNPB and AMP groups has not only triggered rejection of their movement but also has given the community a negative view of the group, so it may have an impact on spontaneous actions which are quite cornering these two groups. We should not complicate the situation with the issue of “Papuan independence”, but we should be more concerned about monitoring and supporting development in Papua, for the sake of optimal development, thereby supporting the improvement of the economy and the welfare of local communities.

Even though in the context of international politics, Papua’s position in the bosom of the Republic of Indonesia is still generally strong and relatively supported by the majority of countries in the world, but maintaining international support must be done. This is simply because there is no guarantee that things will continue to be the same in the future. So the best step is to prepare everything before the unwanted times are approaching. But of course, it is more than just an image effort to the international community, the commitment to sustainable development for the Papuan people is a clear commitment to the constitution itself. Then, the independence of Papua that they aspire to have been implemented since this nation became independent on August 17, 1945. Therefore, Papua and other regions in the archipelago are currently together as a unity within the territory of the Republic of Indonesia.