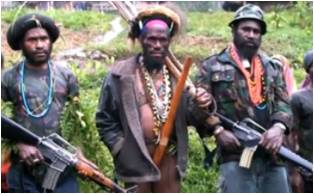 The separatist movement is definitively an attempt to break away from a country or become independent with various motives. One of the most common motives is disappointment with the situation and feeling unfair. But not infrequently there are also other motives, namely the existence of foreign parties who want certain areas to be annexed, as well as personal and group interests. Interests are often identified with economic and political indications.

Separatist movements in Papua are quite numerous, and not all of them are referred to by the general term Free Papua Movement (OPM), as it is widely known. They are under several flags, such as the West Papua National Committee (KNPB), the United Liberation Movement for West Papua (ULMWP), etc. However, in general, these movements are currently grouped into the Papuan Separatist Group (KSP). If they commit violence using lethal weapons, they will be categorized as the Armed Criminal Group (KKB).

Organizations like these are the ones that often cause conflicts to emerge in Papua. With the idea of ​​separatism alone, they can stimulate violence, what if they use weapons. To make matters worse, the issue played in the mass media is that this violence is the result of the security forces of the state. The state has to secure the Papuan people from their actions and actions.

Let us take a look at some of the conflicts caused by the KSP. Even though there are quite some conflicts, including armed conflicts, that occurred in Papua, here are some events that can be summarized to tell the history of the conflict in Cenderawasih Earth. OPM armed resistance broke out for the first time on 26 July 1965 in Manokwari. Then, according to the Institute for Policy Analysis of Conflict (IPAC) report entitled “The Current Status of The Papuan Pro-Independence Movement”, Freeport’s mining activities in 1973 triggered OPM military activity in the Timika area.

In May 1977, around 200 OPM guerrillas attacked Freeport and responded with military operations, especially in Amungme Village. The Freeport land itself was formerly the customary land of the Amungme and Comoros tribes who are the original inhabitants of the area. Executive Director of the United Liberation Movement for West Papua (ULMWP) Markus Haluk in the book “Suing Freeport” stated that 60 Amungme tribesmen were victims of military violence in the incident.

Other cases also appear frequently. For example, the Wasior case in 2001 and the Wamena case in 2003 were again caused by conflicts between the authorities and residents. The separatist movement, which is now synonymous with the term armed criminal group, has accused the government (security forces) of committing human rights violations. Their actions were treason against national law, aka against Pancasila and the 1945 Constitution.

Furthermore, a wave of violence that occurred around the end of 2019 resulted in eight civilians being killed in Deiyai ​​during the riots on August 28, 2019. Then, another riot occurred on September 26, 2019, which resulted in 33 people being killed in Wamena and four people dying in Jayapura. Another tragic tragedy occurred on December 2, 2018, in which 31 workers of the Trans Papua highway project were shot dead in the Nduga region by a Papuan armed group led by Egianus Kogoya.

Until Now, Separatist Movement always make a riot in papuan

The incident was answered by military operations in the Nduga region. Amnesty International Indonesia recorded that 182 Nduga civilians died while on the run after their village was visited by security forces who were hunting for the Egianus group. The separatist movement accuses the security forces of causing civilians to lose their lives, even though their job is to catch the security intruders. The pro-independence Papuan figure, Benny Wenda, is often the mastermind behind the riots in Cendrawasih Earth.

The movements carried out by the KSP were often sporadic and poorly coordinated armed movements. In recent years, the Papuan independence movement has also grown and penetrated international campaigns as a medium for carrying out its actions. This is because the armed movement is no longer considered effective in realizing the desired vision. As a result, they are the masterminds of all conflicts in Papua.

Therefore, they carry out an active international campaign and raise sensitive issues about Papua to the United Nations (UN), as well as to various countries. Even though efforts are rampant, not a single country in the world recognizes that Papua is a country. Indeed, many countries support the independence of Papua, but all of them still recognize Papua as part of Indonesia.