The government remains committed to protecting the land of Papua with policies that are pro to the people of Papua.

The dispute over oil palm plantations in Papua has been heating up recently. Allegations of burning forests and land for oil palm expansion in Papua, which the Korindo Group has accused of causing the issue of environmental destruction in Papua to be raised again.

The Presidential Instruction, which was signed on 19 September 2018, was issued as an effort to improve the sustainable management of oil palm plantations, preserve the environment, and provide legal certainty.

Through the Inpres, Jokowi asked the Ministers to do a number of things for good environmental governance. First, Jokowi instructed the Coordinating Minister for the Economy (Menko) to coordinate the delay and evaluation of oil palm plantation licensing and increase palm oil productivity. In its implementation, the Coordinating Minister for the Economy verifies data on the release or exchange of forest areas for oil palm plantations, maps of Plantation Business Permits or Plantation Registration Certificates, Location Permits, and Business Use Rights (HGU).

In addition, the Coordinating Minister for the Economy establishes general standards for data compilation and synchronization with the implementation of the one map policy relating to conformity including permits issued by ministries / agencies with local governments, Plantation Business Permits with HGU, and decisions on designating or stipulating forest areas with HGU.

While the third instruction, the Minister of Agriculture prepares and verifies data and registration of National Palm Oil Plantation Business Registration Certificate which includes name and number, location and area, date of issue, designation, area of ​​planting and year of planting. The fourth order, the Minister of Agrarian Affairs and Spatial Planning to compile and verify HGU data including name and number, location, area, date of issue and designation.

The sixth order, the President asked the Head of the Investment Coordinating Board to postpone applications for new investment for oil palm plantations or expansion of existing plantations whose land originated from the release or exchange of forest areas unless regulated in the Second Dictum item 2 of this Presidential Instruction.

Eighth, the Regent / Mayor are instructed to postpone the issuance of recommendations / permits for opening new oil palm plantations in forest areas, except those stipulated in Dictum 2 point 2.Finally, ninth, the President asks the Coordinating Minister for Economic Affairs to report to the President periodically every six months or as needed.

The latest development is that the government doesn’t even want the development of oil palm plantations in Papua anymore. The Coordinating Minister for Maritime Affairs and Investment Luhut Binsar Panjaitan said, oil palm development has not been of significant benefit to the little people. For this reason, the government will further strengthen the moratorium that was announced in 2018.

The government will direct investment in Papua to green investment in the people’s economy sector. The investment prioritizes four commodities, including nutmeg, coffee, cocoa and seaweed. 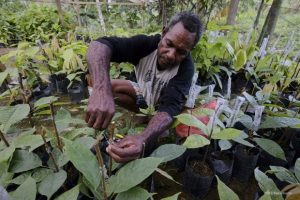 Luhut’s order was immediately executed by the Investment Coordinating Board (BKPM). The Head of BKPM, Bahlil Lahadalia said that he would tighten investment licensing in Papua.

According to BKPM data, in 2019 investment in Papua will reach IDR 15.06 trillion. The details, foreign investment (PMA) amounting to US $ 941 million, equivalent to Rp.14.11 trillion and Domestic Investment (PMDN) reaching Rp947.9 billion. For information, BKPM uses the reference rate of IDR 15 thousand per US dollar.BKPM will map the potential for investment in populist sectors and will direct investors to invest in these sectors.

Thus, it is clear and firm the government’s position in environmental sustainability and the welfare of the Papuan people. The government remains committed to protecting the land of Papua with policies that are pro to the people of Papua. ()