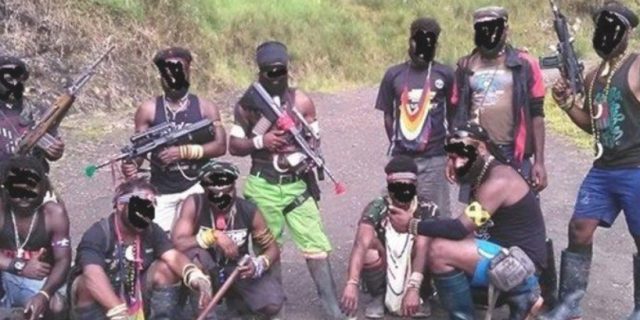 If we look closely, a handful of these people organized themselves through several action committees moving through political diplomacy, both domestically and internationally. They are tied with the same goal, namely to garner support to separate themselves from the Republic of Indonesia with all kinds of efforts, both moderate through referendums and political diplomacy, as well as hardliners with armed separatist movements. Groups that work within the country accompany issues of democracy, freedom, and human rights. They intensively took extra-parliamentary actions by holding rallies, rallies, discussion forums, seminars, advocacy, propaganda, and forming opinions to discredit the government and garner support for a referendum which resulted in separation from Indonesia.

Propaganda and distortion of facts in Papua are strategies to discredit the government. Issues of human rights violations, repression of freedom of association and politics, the stigma of the Indonesian government as a colonial colonizer, and the integration of Papua as a legitimate and sovereign territory of the Republic of Indonesia are forms of annexation, spread to gain sympathy within the country and the international community. This group portrays itself as a civil society fighting for humanity and human rights, even though behind it are nothing more than activists who spread hatred against the Republic of Indonesia and either directly or indirectly can be categorized as a form of support for subversive efforts and separatism.

This propaganda action that contradicts the aspirations of the majority of the Papuan people can be seen from the appeal of the Merauke Regional People’s Parliament / PRD organ on 11 April 2016 in Merauke District, Papua. The PRD is actively persuading the Papuan community to support a group that calls itself the United Liberation Movement for West Papua (ULMWP) to become a permanent member of the Melanesian Spearhead Group (MSG) and demands a referendum on West Papua to be discussed at the meeting. International Parliamentarians for West Papua (IPWP) in London-England on 3 May 2016.

A similar support action was also carried out by a group calling itself the West Papua National Committee (KNPB) by holding a demonstration on April 13, 2016. The KNPB is actively taking actions that lead to provocation by stigmatizing Indonesia as a colonial colonialist and despite declaring against any form of law enforcement efforts that may have implications for the use of force, it is difficult to deny that KNPB propaganda can be a source of inspiration for radicalism and acts of mass violence.

Meanwhile, the actions of sympathizers against radical movements in Papua also took place in Jakarta. On April 12, 2016, at the LBH Jakarta Office, a Press Conference for the Civil Society Supporting Freedom of Expression in Papua took place, with the theme “Stop Repressiveness and restraint of Papuan People’s Freedom of Expression ”. On the occasion of the action which was attended by a handful of people, Jakarta LBH activist, Alghifari Aqsa said that they support the right to freedom of expression of the Papuan people, urging the TNI / Polri apparatus not to act repressively against the Papuan people, especially during the big action on April 13, 2016.

The internationalization of the Papua issue also took place with the emergence of pressure from the West Papua National Parliament (PNWP) to the Indonesian Government, International Parliamentarians for West Papua (IPWP), International Lawyers for West Papua (ILWP), and the United Liberation Movement for West Papua (ULMWP), to recognize ULMWP as a coordination and unity body that represents all the interests of the Papuan people who live in the Papua and West Papua regions. The existence of IPWP and ILWP itself cannot be separated from the role of some foreign parliamentarians and lawyers such as Richard in Natale and Jennifer Robinson who provided support for Benny Wenda, to OPM activists who received asylum in Australia. Jennifer Robinson (an Australian lawyer with OPM sympathies) has been actively involved in organizing a conference of lawyers in Oxford, England in the International Lawyers for West Papua (ILWP) to encourage the Papuan issue to be brought to the International Court of Justice.

The actions of groups such as the PRD, KNPB, ULMWP, and their sympathetic organs must of course be watched out for as a form of threat to Indonesia’s national interests to safeguard the sovereignty and existence of Papuan development. This group is nothing more than an elitist group that does not have a clear mass base, is ahistorical about the Papuan issue, and does not understand the aspirations of the Papuan people at large. This group likely works for foreign interests by exploiting Papuan issues to cover hidden interests or a hidden agenda to control strategic resources in Papua.