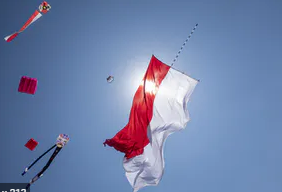 President Jokowi’s administration has given priority to Papua’s development. This commitment is shown by the acceleration of the development of transportation infrastructure, both by sea and air. The government itself targets that in 2018 a land route will be built that connects all districts in Papua. Besides, the government also pays attention to the issue of increasing welfare and the economy by encouraging investment flows in Papua. Perhutani’s sago processing plant was established in South Sorong, West Papua, followed by a plan to build a cement factory with a capacity of 1 million tons/year in cooperation between BUMN PT. Semen Indonesia Tbk by involving local BUMD.

To support this plan, the government has budgeted Rp. 3.8 trillion for both transportation infrastructure and building national activity centers such as Sorong, Jayapura, and Timika, as

well as strategic activity centers in Manokwari, Raja Ampat, and Tanah Merah. The government has also provided wider opportunities for the mass media to cover Papua as a form of commitment to openness and respect for freedom which has always been argued as if the government was repressive towards freedom.

However, it is truly unfortunate that amidst the efforts of President Jokowi’s administration with the support of all components of Papuan society and all relevant stakeholders to spur the improvement of Papuan development in all fields, a small group of people has emerged who claim the broad aspirations of the Papuan people by bringing up the issue of referendum and denying the history of Papuan leaders who have fought together within the framework of the Unitary State of the Republic of Indonesia. Their actions hamper development and conflict with the aspirations of the majority of Papuan people.