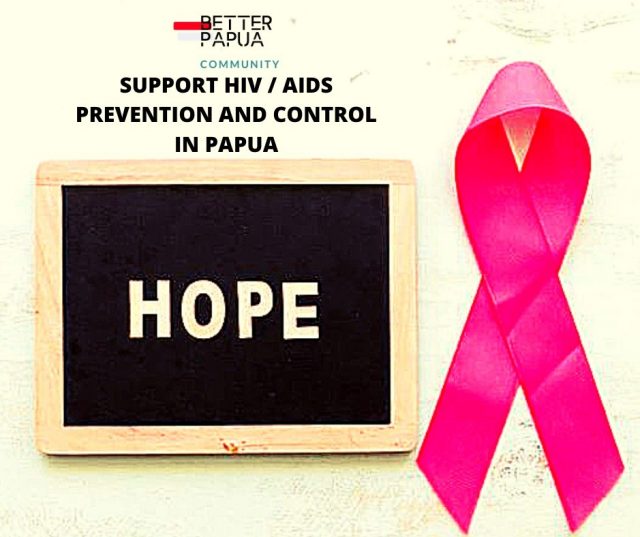 HIV / AIDS is currently still a terrible contagious disease. This disease has a high risk of death. Therefore, every December 1 is celebrated as a day to raise awareness about HIV / AIDS around the world.

Papua is a province with quite high HIV / AIDS cases in Indonesia, ranking third. It was detected that six people from Merauke were infected in 1992, HIV / AIDS is rapidly spreading in Papua from year to year. For example, in 1993, HIV / AIDS was reported to have affected eight times as much, with 49 HIV sufferers and one AIDS person.

HIV / AIDS is transmitted through body fluids including through blood, semen, vaginal fluids, and breast milk infected with HIV. The large number of commercial sex workers, unhealthy sexual behavior, lack of knowledge about healthy sexual behavior, and low education are the causes of the high incidence of HIV / AIDS in Tanah Papua. As a result of the massive spread, Papua and West Papua are included in the pandemic category.

The Directorate General of Disease Prevention and Control (Ditjen P2P), Ministry of Health of the Republic of Indonesia on August 12th, 2020 recorded the accumulative number of HIV cases, Papua was in the fourth rank of HIV. There are 37,662 HIV sufferers in Papua.

In addition, there are also HIV sufferers in infants under 18 months of age. The discovery took place in the January-June 2020 period, totaling 34 people.

Previously on May 29th, 2020, the Ministry of Health declared Nabire Regency to be the highest area of ​​HIV / AIDS cases out of 28 districts and two cities in Papua, namely 7,436 cases. In second place, there were 6,765 cases in Jayapura City, followed by Jayawijaya District with 6,242 cases.

One thing that the government must pay attention to is the presence of people with HIV / AIDS who are still roaming the wider community. Of the total number of HIV positive cases reported as many as 398,784, only about 73 percent of the estimated 90 percent target of people with HIV and AIDS in 2020 was 543,100. Thus, there were 144,316 people infected with HIV / AIDS but it was not detected. They become the ‘ghost’ that spreads the HIV / AIDS virus, thus adding to the chain of spreading HIV / AIDS in society. Especially in sexual relations where men do not use condoms.

The Governor of West Papua, Dominggus Mandacan, acknowledged that the HIV / AIDS problem in West Papua is a serious threat to the generation of development in West Papua. The reason is, based on the findings of the Ministry of Health, the productive age or workforce is affected by this virus. If it is not handled effectively and in an organized manner, it is not impossible that the threat will become real.

On various occasions, President Joko Widodo emphasized that the government remains focused on dealing with HIV / AIDS in addition to handling the Covid-19 outbreak. Handling HIV / AIDS is included in the national strategic agenda.

Jokowi said that the strategic agenda must be a priority of national interests. The President does not want the HIV / AIDS response to go unchecked due to the Covid-19 pandemic.

Even though it has been included in the national strategic agenda, handling HIV / AIDS in Papua requires real action on the ground. Comprehensive coordination among related parties makes the prevention of this disease more effective. Thus, the government’s target for Papua to be free from this disease can be realized immediately. ()