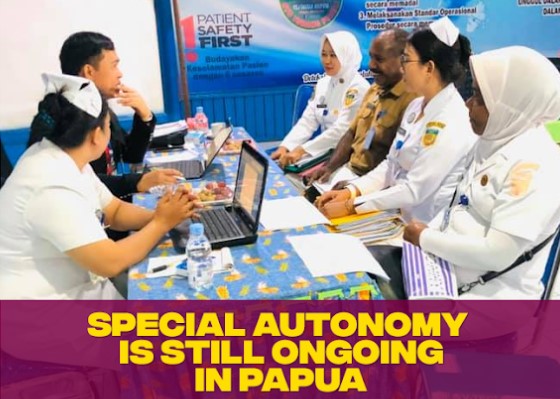 Ridiculous, that is perhaps the most appropriate word to describe how the local Papuan political elite attempted to pass the Special Autonomy plus Papua Bill in the last year. As with other political dramas, which on average have a strange storyline, a plot that sometimes doesn’t make sense and it is unclear who plays the antagonist and who plays the protagonist. Even so, every political drama is sometimes interesting to enjoy for some people, but for others, it feels so disgusting. And the drama of the efforts of the Papuan political elite in their efforts to pass the Special Autonomy plus bill for me is a little sickening.

Law No.21 of 2001 on Special Autonomy for Papua Province (Law 21/2001) is the result of a win-win solution between the OPM separatist group who wants to secede, the Papuan people who still want Papua to be in Indonesia, and the Indonesian Government itself. The struggle for the Special Autonomy Law started on February 26, 1999, when 100 delegates representing various Papuan elements led by Thomas Beanal met President Habibie, although at that time the desire for special autonomy had not yet been realized. The pressure on the central government to immediately formulate and pass a special autonomy law for Papua reached its peak when the Papua Congress II was held in Jayapura on May 29 – June 3, 2000. Finally, the Special Autonomy Law was passed and signed by the first woman President of Indonesia, Megawati Soekarnoputri.

Special Autonomy is for the people of Papua, not for the few Papuan People

According to Velix Wanggai, the Presidential Special Staff for Regional Development and Regional Autonomy, there are 3 approaches used to design the Papua Special Autonomy, the first is that the Government will continue the strategic aspects that have been put in Law 21/2001. Second, amend, adjust, and complement the strategic points in Law 21/2001. Third, the Government included completely new strategic points, which were not previously regulated in Law 21/2001. Besides, Velik also explained that 5 main frameworks are emphasized in the Papua Special Autonomy Bill.

First, the framework of authority. The government wants to strengthen the Government of Papua and West Papua with broader authority and affairs.

Third, the regional financial framework. Through this bill, the Government wants to strengthen and expand the policy of asymmetrical fiscal decentralization (asymmetrical fiscal decentralization). The government is proposing changes to the formula for the Special Autonomy Fund and the Revenue Sharing Fund, as well as an expansion of the use of the Special Autonomy Fund which was previously only education and health but was expanded to some priority sectors according to regional needs. Likewise, the divestment pattern of shares, cooperation contracts, equity participation, and corporate social responsibility funds is regulated.

Fourth, government institutional framework. The revision of the Papua Special Autonomy Law aims to strengthen special autonomy at the provincial level, and also strengthen the role and authority of the Governor, the Papuan People’s Assembly, the Papuan People’s Representative Council (DPRP), the relationship between the authority of the Province – Regency / City, districts and villages. In this bill, the Government proposes that there is only 1 MRP whose position is in Jayapura, as a cultural representation institution throughout the Land of Papua, without being restricted by the provincial administration.

Fifth, a reconciliatory political and legal framework. The government wants this bill to exist as a means of strengthening re-integration and socio-political reconciliation within a unitary state. One of the new ideas proposed was the formation of local political parties for indigenous Papuans.

Judging from the things described by Velix Wanggai, it can be seen in plain view that the Special Autonomy Bill will be a potential vehicle for the Papuan people to prosper and the fulfillment of the customary rights of the Papuan people. But why do I say so ridiculous? Here’s my reason

Lack of Evaluation from the Regional Government of Papua

So far, if we pay attention to demonstrations carried out by political faction organizations from the OPM (Free Papua Organization) such as the KNPB (West Papua National Committee) and AMP (Papua Student Alliance), they have always shouted about the failure of Otsus Papua, then blamed the government. center regarding the failure. The chairman of the MRP (Papuan People’s Council) in the 2010 MRP session, Agus Alua said “Failed special autonomy means that our attitude is a reference point”. There are thoughts that “Otsus is failing, so the central government is the problem”. Either forgot or deliberately forgotten, that the success or failure of the implementation of the Papua Special Autonomy is not only the contribution of the central government, the Papuan regional government, as the implementer of the Papua Special Autonomy also has contributed to this.

This needs to be realized by the Papuan regional government, if the Papuan political elite always shouts “Otsus Failed” then it is no different like throwing dirt in their faces. If Otsus is considered a failure, then the Papua regional government should carry out an in-depth evaluation. The corrupt behavior of Papuan officials and the unprofessionalism of bureaucrats and civil servants in Papua (see: Identifying Papuan Problems through the 5 Why’s Analysis Method) must be included in the discussion of the evaluation, not just leaving all the blame to the central government. A comprehensive evaluation must be carried out by the Papuan regional government in the implementation of the Papua Special Autonomy before submitting the Special Autonomy Plus Papua Bill so that mistakes that have occurred do not happen again.

Lord Acton, a writer, and politician, once said in one of his famous sentences “Power tend to corrupt, and absolute power corrupts absolutely”. If you look at the 5 main frameworks of the Papua Special Autonomy Bill as described by Velix Wanggai above, the Papuan regional government will have enormous powers if the Special Autonomy Bill is implemented. Without a thorough internal evaluation by the Papua Regional Government, the improvement in the welfare of the Papuan people will not occur, instead what is increasing is the corrupt behavior of the Papuan elites.