“Veronika Koman, is one of the instigators. Incitement is a criminal element included in the Criminal Code. Including participating in mobilizing,” – Chief of Papua Regional Police Inspector General Pol Paulus Waterpauw, seputarpapua.com (20 February 2020)

The provocateur for the bloody riot in Papua in August 2019, Veronica Koman again acted up. She posted a statement on the integrity pact for Papuan student scholarship recipients on his Twitter account with an inciting sentence.

In her twitter account @VeronicaKoman, she mentioned the integrity pact for West Papuan student scholarship recipients at Pattimura University on the condition that they would not participate in any demonstrations and had to make a video testimony about the importance of special autonomy for West Papua, and if these conditions were not met, the scholarship would be suspended.

This sentence has a negative tendency with the aim of cornering the Indonesian government. In addition to his exaggerated statement, Veronica Koman’s integrity pact sentence is different from the official statement of the Ministry of Education and Culture (Kemendikbud).

The precautionary principle is required when receiving information submitted by Veronica. Examining Veronica Koman’s track record, Veronica’s statements are always charged with destroying unity and integrity in Papua and Indonesia. She admitted that she is a human rights lawyer, often spread provocative sentences. Of course there is an something behind her actions.

Previously, Veronica had received a scholarship from the Indonesian Ministry of Finance’s Education Fund Management Institute (LPDP). He received a scholarship of Rp. 773 million for the Master of Laws education at the Australian National University in 2016. However, this scholarship then became problematic. Veronica violated the LPDP contract agreement, namely having to return to Indonesia after the study period and contribute to Indonesia’s development.

In fact, after completing education in Australia with the cost of the Veronica LPDP scholarship, she did not return to his homeland. The LPDP sent a warning to Veronica Koman. Veronica’s claim that she returned to Indonesia in 2018 turned out to be false. At that time, she went to Indonesia to accompany student actions in Surabaya and returned to Australia in a position that he had not finished his studies. 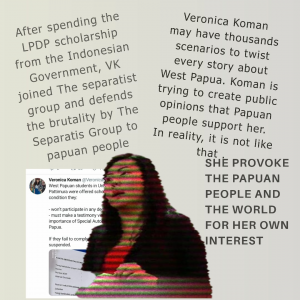 Veronica reportedly graduated from her master’s degree in Australia in July 2019. After graduating, Veronica did not return to Indonesia. The LPDP then decided Veronica to return the scholarship money. This woman who was born in Medan, June 14, 1988 said to be agreed to return the tuition fees from the LPDP in installments.

The LPDP noted that Veronica paid the first installment of the scholarship refund to the LPDP amounting to Rp. 64.5 million. However, Veronica did not pay the next installment until news emerged about the collection of funds from the Ebamukai solidarity team on behalf of the Papuan people.

From a legal perspective, Veronica is involved in the Papua case. The Papua Regional Police stated that Veronica was one of those responsible for the bloody riots in Papua in August 2019. The Papua Police Chief Inspector General Pol Paulus Waterpauw said Veronica had committed the crime of sedition as regulated in the Criminal Code.

Paulus also stated that Veronica Koman’s report regarding 57 political prisoners and 243 civilian victims who died in Nduga since December 2018, which was then submitted to President Joko Widodo were baseless accusations. The report was prepared without complete research. The accusations filed by Veronica and friends were only to find a stage at the UN session.