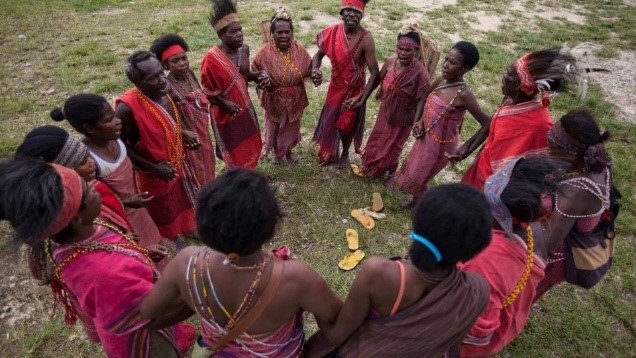 Papua Province is part of the territory of the Unitary State of the Republic of Indonesia (NKRI) which was formerly known as Irian Jaya which later changed to Papua and West Papua which have a variety of ethnic and regional languages ​​and are inhabited by other tribes in Indonesia. In contrast to other provinces in Indonesia that have regional autonomy, the Indonesian Government has provided a special autonomy policy for the Papua Province. Until now this policy has been questioned by the Papuan Separatist Group (KSP), such as the KNPB, OPM, UMLWP, etc. This paper will convey facts about why these groups are not correct.

According to Law no. 21 of 2001 Special Autonomy itself is a special authority recognized and given to the Papua Province, including the provinces resulting from the division of Papua Province, to regulate and manage the interests of local communities according to their initiatives based on the aspirations and basic rights of the Papuan people. This authority also means a greater responsibility for the Province and the people of Papua to organize the government and regulate the use of natural resources in Papua to the maximum use for the prosperity of the Papuan people as part of the Indonesian people under statutory regulations.

This authority also means the authority to empower the socio-cultural and economic potential of indigenous Papuans through representatives of custom, religion, and women. In this special autonomy, indigenous Papuans have a role, including participating in formulating regional policies, determining development strategies while respecting the equality and diversity of life of the Papuan people, preserving Papua’s culture and natural environment. The granting of special autonomy for the Papua Province is intended to achieve justice, uphold the rule of law, respect for human rights, accelerate economic development, increase the welfare and progress of the Papuan people in the framework of equality and balance with other provinces. That is why the parties against Otsus do not have the correct database, only one-sided accusations,

indigenous Papuans, based on respect for customs and culture, empowering women and strengthening religious harmony

Papua’s special autonomy will end in December 2021 and many parties think that this Otsus should not be continued, but the Indonesian Government through the Minister of Home Affairs Tito Karnavian plans to continue this Otsus for the next 20 years. Many parties are opposed to the extension of the Special Autonomy because it is considered ineffective for the Province and the people of Papua, especially from the KSP and its co-operatives.

However, in my opinion, although the Papuan Otsus raises many pros and cons, there are many positive impacts from the implementation of Papua Special Autonomy, among others, with the existence of Otsus, the Papuan people (indigenous Papuans) are involved in all political activities and decision making, in the sector. health, development of health centers and hospitals throughout Papua, in the education sector, building schools and providing opportunities for Papuan children to study abroad and become officials in all government institutions, in the infrastructure sector, road construction, electricity, clean water, logistics by land and air, and the one price fuel oil (BBM) policy is a manifestation of the accelerated development that is currently taking place in Papua, in the economic sector the Central Government has issued Special Autonomy funds for Papua to develop the Papuan economy, the result is the economic conditions of Papua and Papua West remains strong in the middle pandemic.

After reading from several sources, there are many indigenous Papuans who hope that the Special Autonomy policy given by the Central Government to Papua will continue to improve infrastructure development in the Papua region as well as education and the welfare of the Papuan people. Quoting from papua.antaranews.com, there is a Papuan female figure who hopes that Otsus will continue. The female figure, Yosepina Kossy, said that the Otsus program for Papua was very good for the Papuan people in many sectors. She said that “we see Special Autonomy in the community, especially Jayawijaya, we have felt the positive impact”.

Besides, support also came from the Yalimo Community Leader in the city of Jayapura Soleman Eselo said that he was an educator and many of his students had become officials, with the special autonomy funds he received a lot of assistance, maybe if there was no Otsus, building the place where the child educates Papua is still ugly and damaged. Therefore he requested that Otsus be continued to develop Papua.

Previous Otsus or it can be said that Otsus volume 1 has been running quite well and has received a lot of positive responses from the Papuan people so that in my opinion there will be a lot of positive sides to being gained if this Otsus is continued, including infrastructure development that has been running but has stalled, can be continued so that development can evenly be distributed throughout Papua. With the continuation of Otsus, the central government can establish more intense communication with the Papuan people.

Also, with the special autonomy fund, Papuan children can continue their education, in which this special autonomy provides education guarantees to the young generation of Papua so that they can access education to higher education so that not only infrastructure and natural resources are built but also build human resources. , because with good human resources, Papua can compete with other regions. Special Autonomy for Papua does not need to be stopped, only clear supervision and distribution is needed so that the implementation of Otsus volume 2 can run smoothly so that it can advance Papua as a whole.