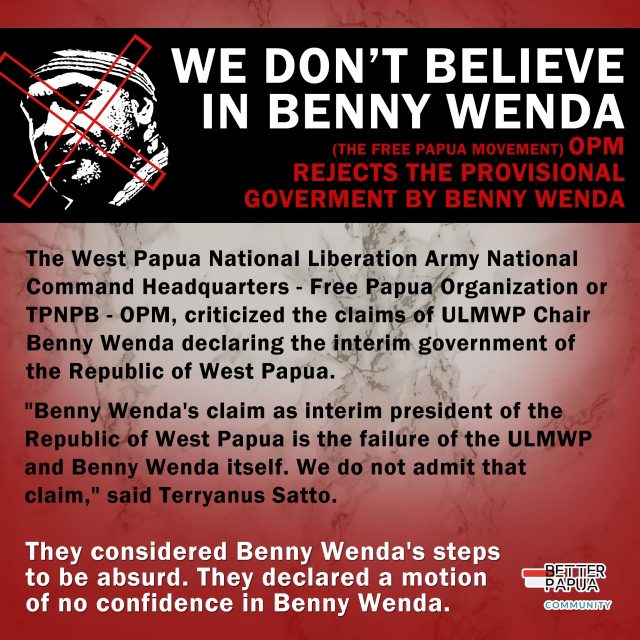 Regarding December 1st, which many Papuans think of as the birthday of the OPM, many facts do not show this. Historical facts and legal reasoning show that December 1 is not properly called the birthday of the Free Papua Organization (OPM). Why is this so? I have several reasons On 18 November 1961, after an extraordinary meeting of the Papua Council or previously known as Nieuw Guinea raad, in Dutch, was decided on the rules regarding the Papuan flag and national anthem. This rule was set by the Governor-General PJ. Platteel Regarding the shield and emblem, the regulations are still pending the decision of the High Council of Nobility (Hoge Raad van Adel) in The Hague, Netherlands.

However, on December 1st, 1961, there was a flag-raising in the city of Hollandia, currently Jayapura, and the capital of spare parts. Thus, that that day, December 1st, 1961, could not be called or declared as New Guinea Independence Day, but that history records that the process there was being carried out, and at that time the Dutch were still sovereign over the Land of Papua.

That is why December 1st is not the OPM’s birthday, even though so far it has always been closely related to Papua’s efforts to become independent from Indonesia. This statement was made by the spokesman for the West Papua National Liberation Army-Free Papua Organization (TPNPB-OPM), Sebby Sambom. “December 1st is the day Papuan leaders and the Dutch government announced the embryo of the state. OPM is fighting for that recognition. ”

But of course, the OPM spokesperson’s statement did not represent the views of the whole Papuan people, even provocatively. All Papuan people have given a firm statement for independence or with Indonesia. This statement was formalized in the Popular Opinion Determination (Pepera) in 1969. Those who say that the Pepera is an Indonesian trick to control Papua, to arrange the result so that the Papuan people choose to join Indonesia are also not correct. Indonesia helped liberate Papua from the Netherlands through the New York Agreement in 1962. The integration of Papua into Indonesia was also approved and ratified by the United Nations. They did direct supervision when the Pepera was held in 1969. The UN sent 50 people to oversee the implementation of the Pepera which was held in 8 districts and was attended by 1026 members of the Pepera Deliberative Council (DMP), representing 809,327 Papuans at that time.

The results are then agreed upon and approved with the signing of all those present at the meeting. In de facto, the Papuan people chose to integrate with this territory of the Republic of Indonesia. The Pepera itself was passed through UN Resolution No. 2504 at the general assembly on November 19, 1969, approved by 82 countries, while 30 other countries voted to abstain.

The parties contra with this argued that UN Resolution 2504 took away the political and economic rights of the people of West Papua, who are part of a nation in the world. They say that the UN resolution can be termed a wild fireball that is being played in the arena of geopolitical interests in West Papua, namely US imperialist interests as the main objective of the economy, and Indonesia’s interests being political goals.

The problem now is that those who question the legitimacy of Papua to be part of Indonesia, even want Papua to become independent, means that these parties have not learned history and law. Opposing Indonesian sovereignty in Papua is not only an act against our national law but also against international law in the form of this resolution. Then, the UN resolution is also a small part of the UN Charter, which has been recognized by all 193 UN members in the world.

The UN has calculated the consequences in a proper democracy of the pros and cons of the results of this Act. Cross opinion against those who accept the decision as well as those who oppose the decision. The lawsuit regarding the legality of the Act by irresponsible individuals is considered to be only an attempt to find scapegoats by exploiting historical gaps that are used for their interests.

The 1969 Pepera has been implemented according to regional conditions and community development, which made it impossible to do it “one man, one vote”. If this is seen as a deficiency or disability the UN has accepted the legality of the Act through resolution No. 2504. The international community fully acknowledges and none of the parties reject it. In essence, there is no Papuan independence day, whether it is December 1st, July 1st, or any other day. If there is, it is only a provocation from the OPM that often voices an independent Papua.