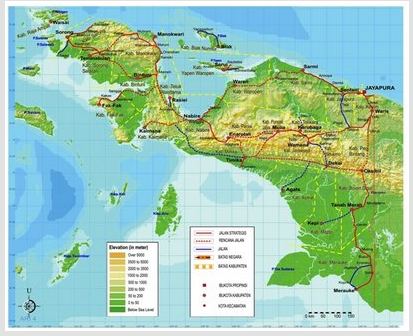 One of the difficult problems faced by the government is the demand for Papuan disintegration to establish its own state. This request has long been echoed by the Indonesian government. One of the triggers for the request for disintegration was due to claims about the disappointment and dissatisfaction of the Papuan people with the central government, for example, is the problem of development in Papua which is considered incompatible with the fifth principle of Pancasila, the state’s objectives in the 1945 Constitution and the United Nations Declaration on the Right to Development. where development in the Papua region is considered to be lagging behind other regions.

On the basis of this underdeveloped assessment, the government was born with special autonomy, one of which raises the issue of development. However, in reality the special autonomy is still hampered by several things, besides that, on the other hand, development in Papua is still difficult to do.

An example is the blockage of Sentani airport in Jayapura in 2009. This is due to the claims of five tribes (the five tribes are the Faile, Sokoi, Alio, Talem, and Yoku Tribe) which state that the land created by the airport is their customary right. Therefore, the five tribal chiefs asked the government for compensation of Rp. 79 billion.

It is very unfortunate that the air blockage occurred due to limited land roads so that air transportation is a vital means of transportation in Papua. Air transportation is used as the main alternative for people to move to other areas, besides that it is also a means of transporting all necessities, for example clothing, food and shelter. The dispute case is also very confusing because there are 5 tribes who claim the land, even though the land should belong to the government which has been granted by the Dutch government to the Indonesian government.

The land issue in Papua is very complex, each tribe recognizes their customary land and claims without any clear basis. This problem creates obstacles in development in Papua. Another obstacle to development in Papua is the overlap of customary law with formal law, where, for example, land rights by non-Papuans are not recognized by Papuans – for them non-Papuans only rent land, this legal dualism creates legal uncertainty for immigrants.

Another problem that hinders the development of Papua is the geographical condition of Papua which is dominated by steep hills and mountains, making it difficult to build electricity networks to meet the basic energy needs of people, especially those living in remote areas. The construction of an electricity network that reaches the entire interior of Papua is very expensive and takes a long time because to build it must cross mountains with steep slopes and steep valleys.

Therefore, it takes the patience of the Papuan people to catch up. Until now, the government must be thinking hard to accelerate development throughout Indonesia. So answering the Papuan people’s request for development cannot be done lightning fast because of these many obstacles.

Special autonomy in Papua is the key to developing Papua, and the government is very serious about that

Demands for disintegration from Indonesia on the basis of the assumption that the central government does not “pay attention” to Papua, is wrong. This is because the special autonomy for Papua has been born, which gives special authority to the Papuan regional government, in addition to the special autonomy for Papua, several other policies that have been very beneficial for Papua have also been introduced by the government. Therefore, there is no longer any reason for the Papuan people to establish a separate state from Indonesia, because the government is very sensitive in trying to solve problems for Papua.

The birth of policies that are very beneficial for Papua is one of the government’s efforts to show its love for the paradise earth which has been entangled with several problems. Therefore, it is better if the community appreciates this government policy, for example by participating in development or other things that can encourage the acceleration of development in the Papua region so that Papua quickly leaves behind.