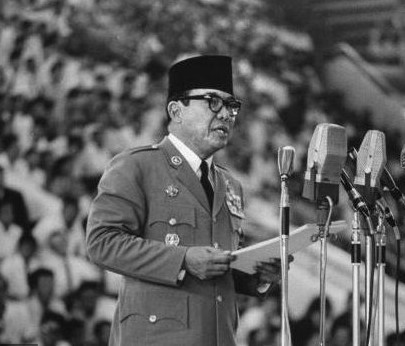 It is said that Moh. Hatta preferred West Irian (before becoming Papua) to determine its own destiny due to ethnic differences. He added that if at that time the state tried hard to enforce the Red and White flag on the land of Papua, the international community would see that Indonesia wanted to rule over Papua. Although the statements made by him were not as firm as Ir. Soekarno, Moh Hatta continued to try to defend Papua through the negotiating table by means of compromising conflict resolution.

At the same time, the Netherlands was experiencing a difficult time because the Netherlands had lost a lot of territory while the Dutch East Indies was the largest colony. As Ir. Soekarno as the founding fathers was very vocal in responding to West Irian. Unmitigated, Soekarno considered West Irian as part of the body of the Unitary State of the Republic of Indonesia. Same is the case with Moh. Hatta, Soekarno also knew the reason for the Dutch to defend West Papua.

The reason for the absence of the Netherlands is Papua’s abundant natural resource potential and is marked by supporting geological researches. In the BPUPKI meeting it was agreed that all areas of the former Dutch occupation were integrated into the territory of the Unitary State of the Republic of Indonesia. Departing from the results of the agreement of the BPUPKI meeting, Soekarno instructed the establishment of the University of Cendrawasih, November 10, 1962 in line with efforts to develop human resources before developing potential natural resources.

“Until now, the special autonomy funds can be used optimally in management and can be felt by all Papuan people”

Starting in 1999, several representatives of Orang Asli Papua (OAP) such as Thaha Alhamid and friends armed with beliefs and future orientations met with President B.J Habibie to separate themselves from the Unitary State of the Republic of Indonesia. After that, the Papuan people held successive Papuan Congresses led by Thaha Alhamid in 2000.

The results of this congress were later adopted as Special Autonomy (Otsus) for Papua as well as a win-win solution as an effort to resolve the multidimensional conflict in Papua since 1962. This was strengthened by the enactment of Papua Special Autonomy in Law No. 21 of 2001.

Furthermore, the central government disbursed funds for the development of Papua through the special autonomy fund or two percent of the total national General Allocation Fund (DAU) ceiling with a period of 20 years. This special autonomy fund is then used to finance the development and maintenance of infrastructure, empowerment of the people’s economy, alleviation of the economy and to finance the provision of education, culture, social emancipation and health.