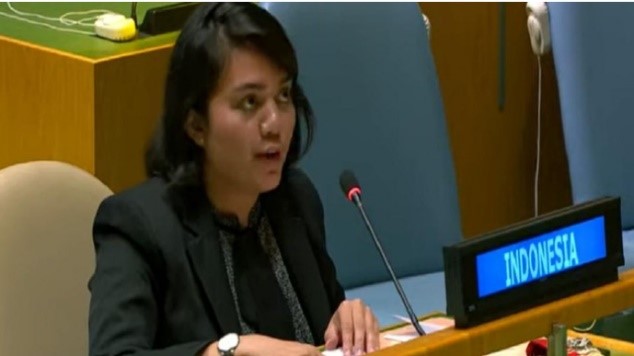 On Monday, September 28, 2020, the issue of Indonesia’s foreign policy has been hot. Amid the unresolved pandemic season and efforts to restore economic conditions, the warming of this discourse is a medicine for the life of our nation and state.

It was Silvany Austin Pasaribu, a young Indonesian diplomat at the United Nations (UN) who was the trigger. With excellent diplomacy skills, he “taught” Vanuatu about international law, the esteem of a country, and the art of diplomacy. This happened after the Prime Minister of Vanuatu, Bob Laughman, raised the issue of Papua at the 75th UN General Assembly.

In terms of international law, the western part of Papua island and the surrounding small islands, including the territory of Indonesia and eastern Papua, have become their state called Papua New Guinea. Currently, West Papua is divided into two provinces, namely Papua Province and West Papua Province.

West Papua — an area raised in the diplomatic dispute by the Vanuatu prime minister — was handed over by the Dutch to become part of Indonesian territory on May 1, 1963, and was given the name Irian, changed to West Irian, Irian Jaya (1967) and now Papua (2001). This is because, like other parts of Indonesia, western Papua is a former Dutch colony and is named Nederlands Nieuw-Guinea or Dutch New Guinea.

In 1969 — three years after the signing of the work contract with Freeport in 1967 — a Public Opinion Determination (Pepera) was held by deliberation, not in the form of a referendum with the provision of one man one vote. Even though it was carried out under supervision and was endorsed by the United Nations, this method of determining people’s opinion which was considered unusual until now has become one of the weak points that have often been used as an entry point for diplomatic attacks against Indonesia.

The reform era, marked by the transition of political power in Indonesia since 2018, also affected Papua. President Abdurrahman “Gus Dur” Wahid complied with the request of the Papuan people to change the name of the Irian Jaya Province to Papua Province. During the presidential visit as well as welcoming the New Year, on the morning of January 1 2000 Irian Jaya changed its name to Papua, a name that was widely known during the Tidore Kingdom in the 19th century.

Along with that, to accelerate development and the independence of regional governments, Law no. 21 of 2001 concerning Special Autonomy for Papua. Thus, in addition to experiencing a name change, this largest and eastern province will receive a greater budget allocation and authority in managing itself. In 2003, despite various protests, Papua was divided into two provinces, the eastern part to become Papua Province and the western part to become West Papua Province.

“Vanuatu are not a representative of the Papuan people and Indonesia has full authority to manage Papua following the principles of state administration and good governance.”

The main issue that is often voiced by civil and international communities regarding Papua – and this that was repeatedly raised at the UN General Assembly – is related to allegations of violations of civil rights, which include economic, political, social, and cultural aspects by the state or state apparatus (ICP, 2018). Along with restoring these rights, the Indonesian government is asked to ensure the elimination of acts of violence and impunity.

The demands are further separatist, namely framed in a political conflict scheme: the Papuan people must be given the right to self-determination through a referendum. The main goal is for them to have their state and government. Indonesia was even positioned as a “colonizer” who “annexed” Papua illegally, which in the 1960s was made possible due to the assistance of the United States with an interest in mining at Freeport.

However, as stated by Silvany and dozens of other Indonesian diplomats before that, whenever these issues arise at the UN General Assembly, one can definitely answer that Papua is a legitimate part of the territory of the Unitary State of the Republic of Indonesia (NKRI). And with all the rights attached to these political territories, Indonesia has full authority to manage Papua following the principles of state administration and good governance.

When viewed chronologically, the raising of the issue of human rights violations in Papua, to attract international attention, has at least been a trend since 2016. Starting with more diplomats, especially from several countries in the Pacific region which are Melanesian, the trend is it is decreasing until only Vanuatu remains on September 28, 2020. This means that the issues raised are appropriate if they are declared diplomatically as making it up and so on.

In the context of state administration, if viewed wisely, the emergence of issues of violation of civil rights is primarily a consequence of the state’s interest in upholding sovereignty and the interests of civil society in fighting for their freedom or rights. This dialectic occurs in all countries in the world and is a prerequisite and precedent for improving the quality of democracy. That is, not all forms of dialectics occur peacefully and lead to democratization, while not all of them end in conflict and cause the involution of democracy.

With this framework of thinking, which is universal, the main task of government administrators at the state and regional levels is of course the welfare of Papua within the framework of good governance. Because, if not, the state will be trapped in the enforcement of repressive sovereignty or iron-fisted politics that only emphasizes legal-formal existence.

On the civil society side, the oversight function of state / regional policies and community empowerment should be the focus. In any social context — where civil society can think, behave, and act intelligently — shifting solutions in policy bargaining is easier to occur. Because of the issue of separatism is raised against the provisions of valid international law, it will be like pouring water on the sand. Even political martyrs will fall away.

So far, looking at the development of Indonesian government policies in Papua as a whole, it cannot be said that it has gone nowhere (status quo). Politically, name change, special autonomy, the release of political prisoners, infrastructure development, and other policies in the reform era are part of the solution. In civil society-state political relations, this is the contents of the empty glass.