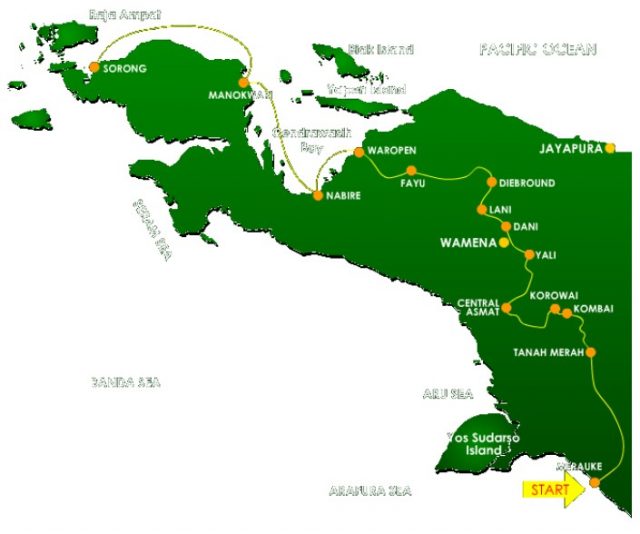 The development in Papua which has been boosted since the existence of special autonomy has made the people very satisfied. The leaders in Bumi Cendrawasih also agreed that this program should be continued. The goal is that development in Papua is more equitable. So that people’s income increases.

Raja Ampat is one of the tourist attractions in Papua which is famous to the international community. The advancement of the tourist area is supported by the development of infrastructure on Earth of Cendrawasih. Because cars can go quickly and safely via the Trans Papua Road. Meanwhile, foreign tourists can land at Sentani International Airport.

The rapid progress in Papua is a result of special autonomy. The program, which was started in 2001, made the face of the Earth of Cendrawasih more beautiful and became a modern area, without destroying nature. In 2021, otsus volume 2 will resume, and everyone from civilians to community leaders agreed to extend the program.

Kornelis Way, Maybrat community leader, stated that he and all people in West Papua support the sustainability of special autonomy. Because this program provides enormous benefits, especially for the 4 priority programs. Namely infrastructure, health, education, and community economic empowerment.

The impact of Papua’s special autonomy can be seen from several sectors, including infrastructure, health and education

The results of the special autonomy in the infrastructure sector have been seen, such as the Trans Papua Road, Youtefa Bridge, Sentani International Airport, and others. Infrastructure development is needed, because it makes transportation easier and reduces the price of goods. The reason is that the freight costs are reduced, since they can send by road, not by air.

Meanwhile, for the health program, many hospitals and health centers were built. The hospital is also of national standard and complete with health facilities and reliable medical personnel. The number of Puskesmas that is added is very important, so that treatment is easier. As well as launching programs to eradicate malaria, tuberculosis, and AIDS.

For the education sector, apart from building schools, the special autonomy funds were also channeled into scholarships. So that Papuan children can study up to university. These funds are also given to Papuan sons who will register to become members of the TNI, and they are given a special special autonomy route. So that it can keep the Papua region in order to remain conducive.

For community empowerment programs, the target is women or who are familiarly called mama, who trade in the market. They received assistance in the form of scales so they could trade smoothly, and were given capital in the form of woven noken. So that mothers can be more empowered and get a stable income.

The progress that has been made thanks to the Special Autonomy Volume 1 has made officials also support it. The Coordinating Minister for Political, Legal and Security Affairs Mahfud MD stated that 13 DPRD heads in the West Papua region approved the extension of this program. The extension of the special autonomy system is needed for the advancement of the Cendrawasih Earth, as well as the creation of security stability.

Apart from these 4 sectors, the special autonomy funds are also channeled into other fields, namely access to food and clean water, housing, communication, and economic access. So that the money given by the central government is actually used for the advancement of the Papuan people in various fields. They can live comfortably, because they have access to sufficient clean water and good telephone connections and other means of communication.

When all officials and community leaders in Papua support the sustainability of special autonomy, it is hoped that civilians will also support this program. The reason is because special autonomy is given to them, in a special way. So that there is no difference in progress between western and eastern Indonesia.

The extension of Otsus until 2041 is a positive thing, because it brings progress for all Papuan people. This program needs to be continued, so that the development of infrastructure, education, economy and other fields is realized. So that there are no projects that get stuck and harm the community.