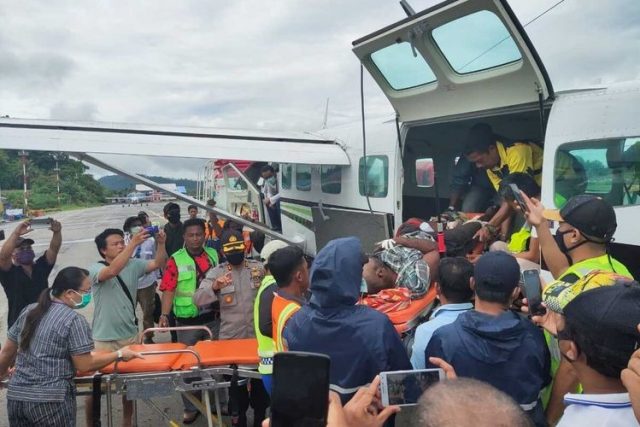 The police accused an armed criminal group (KKB) of shooting civilians, RNR in Bilogai Village, Sugapa District, Intan Jaya Regency, Papua, Monday (8/2). The perpetrator disguised himself as a kerosene seller who came to the victim in the afternoon.

Police said the victim had called his wife to get the jerry cans. However, the perpetrator immediately pointed a gun at RNR when the victim’s wife took the jerry can.

The perpetrator shot the victim with a short rifle. Then the perpetrator fled. The victim’s wife immediately screamed and asked for help from the surrounding community. The sound of the gunfire made people run.

Next, one of the victim’s neighbors then reported the incident to the Sugapa Police for help. Joint personnel immediately went to the TKP and evacuated the victim to the Bilogai Health Center for medical treatment.

“With this incident, it further proves that the KKB continues to disturb the comfort of the community to live their daily lives.”

Meanwhile, Intan Jaya Regent, Natalis Tabuni, said that since the beginning of 2021, he and his staff had not been in Sugapa at all to run the government.

One of the reasons is because of the safety factor. The discomfort was felt not only by Natalis, but also by the entire State Civil Service (ASN) in the area. According to him, ASN members were often visited by KKB members who asked for assistance and had to be fulfilled.

Not myself, all civil servants, especially local sons, are rarely there because they are threatened. (KKB) ask for money or food, if they are not given (KKB) even though it is cold and rainy, they can go home fully armed, “said Natalis.

KKB, continued Natalis, did not hesitate to commit armed violence against anyone who refused to provide the assistance requested.

This was confirmed by the Papua Police Chief Inspector General Paulus Waterpauw who said that the wheels of government in Intan Jaya Regency were not running because the security situation was not conducive. Intan Jaya Regent Natalis Tabuni told Paulus that he felt unsafe in Sugapa District, the capital of Intan Jaya Regency.

Paulus said that the KKB even specifically threatened Natalis Tabuni. He also emphasized that the security apparatus will try hard to restore the security situation in Intan Jaya to being conducive. Support from the local government is urgently needed to assist the operations of the security forces.

The facts above show that the KKB is a major threat to the life of the people and development of Papua. Where, with their fellow Papuans, they have the heart to commit acts of violence to meet their personal needs. The disruption to the local government proves that what triggers the lack of optimism in Papua’s development is the KKB itself.