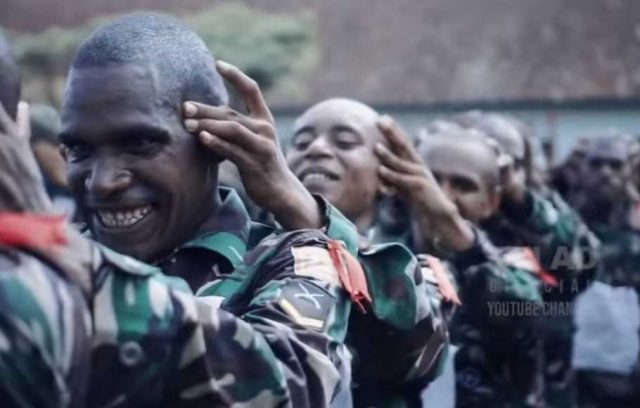 A total of 1,000 non-commissioned cadets for the Special Autonomy for Indigenous Papuans (Otsus OAP) of Kodam XVIII Kasuari 2020 were asked to maintain the integrity of the Unitary State of the Republic of Indonesia (NKRI) and instill nationalism.

As many as 1,000 non-commissioned officers from Papua are currently undergoing the Special Autonomy Special Forces OAP Kodam XVIII Kasuari 2020 in a number of Military Regional Master Regiments (Rindam) on Java Island.

In this education a new method is also applied, namely the foster family method by making each student soldier from an area other than Papua, who has first undergone education as a superintendent for two students from Papua. As older siblings, they are assigned to help Papuan students understand educational material.

Pangadam XVIII / Kasuari, Maj. Gen. TNI I Nyoman Cantiasa said that the Otsus non-commissioned officer program was a pilot program and became the first model to be implemented.

“The recruitment program for candidates for the Special Autonomy Pathway is a pilot project, if successful, it is likely that next year there will be a similar program”

Meanwhile, the West Papua Regional Police Chief has also issued a telegram letter Number: ST /50/III/DIK.2.1/2021 dated February 9, stating that the recruitment of NCOs will be carried out through the affirmation of the Special Autonomy route in 2021 with a student quota of 1,500 people consisting of 1400 candidates. male non-commissioned officers and 100 female non-commissioned officers (Polwan).

The provisions in the recruitment process in the West Papua Police Chief’s telegram letter, the parents of the NCO candidates are native Papuans (OAP) or are descendants of OAP as evidenced by the MRPB recommendation letter.

Then prospective participants who are not OAP but born and raised and have received elementary, junior high and high school education in West Papua and are strengthened by an MRPB certificate.

The recruitment of indigenous Papuan youths to become members of the TNI – Polri shows the government’s commitment to developing Papuan human resources. As is known, since it was launched in 2009, the Papua Provincial Government through a scholarship program sourced from special autonomy funds has produced thousands of graduates from various educational institutions.

Four overseas graduates from the academy plus pilot or pilot licenses, 24 people in collaboration with the S2-S3 BIT LPDP pathway.

The data above shows clear evidence of the Government’s commitment to developing Papuan human resources through Otsus funding. Therefore, we should support the extension of the increase in the Special Autonomy fund for the next 20 years.