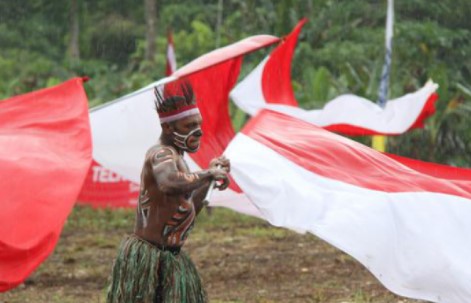 The harmony on Earth of Cendrawasih is sometimes torn apart by the acts of the separatists. The people of course reject them, because they want Papua to be a zone of peace. When Papua becomes a peaceful region, all the people become harmonious, even though they are of different ethnicity, religion, level of education and occupation.

In the past, the stigma of Papua was a dangerous area because there were still wars between tribes, which used weapons such as arrows. In addition, there were attacks with firearms from the KKB and other separatist groups. This is what makes people afraid to enter BumiCendrawasih. Even though at this time there were no longer tribal wars and the KKB rarely messed up.

“Hamonization in Papua in order to become a peaceful zone is very important to do. The reason is because there are not only native residents of Bumi Cendrawasih, but also immigrants from Java and other islands”

Piet Nawipa, Head of the Mee Tribe in Mimika Regency stated that to develop Papua as a zone of peace, it requires harmonious cooperation between the local government, the army, the police, and people from various tribes. So there is cooperation between the apparatus and the community and all parties, in order to create peace on the Earth of Cendrawasih.

Piet Nawipa continued, each tribe in Papua is also required to protect and protect its grassroots community. Hopefully in December, which is the last month because of Christmas, there will be no more violence on Earth of Cendrawasih. People can enjoy the atmosphere of the year-end holiday and welcome December 25 with peace and happiness.

In Papua, before there were migrants, peace between tribes had actually been plotted. Due to the fact there the indigenous people do not only consist of one tribe, but there are many ethnic groups. For example the Dani, Asmat, Arfak, Atori, Atam, Awyu, and others. Ethnic differences do not make their lives clash, because they usually live side by side in peace.

But unfortunately there is an issue of SARA that was raised by the people, because they don’t like seeing the peace there. Migrants who are not indigenous people are clashed with Papuans and provoked to compete in the world of work. If an HRD recruits employees, what is seen is their ability, not their ethnicity or religion.

In addition, separatists have issued hoaxes containing SARA issues on social media. They accuse the Indonesian government of deploying troops to eradicate the melanesian race. Meanwhile, the authorities entered Papua to ward off the separatists, because they were traitors to the nation, not because of their ethnicity and race.

The apparatus consisting of TNI and Polri troops work hard to maintain peace in Papua, so that there are no more provocations spread by separatists. They use psy war to play psychologically the indigenous Papuans, so they don’t want to cooperate with the authorities. Insyaf, the people people as it to be believe with the police, because they are friends of the people.

The people who are protected by the presence of the authorities in Papua, because in order to maintain peace, they dare to take their own lives. The troops did not see who was protected, whether from what tribe or religion. However, they carry out their duties for the sake of the nation and state, and are trying hard to bring about peace in Papua.

Let us maintain peace in Papua, especially ahead of Christmas. There should be no more tribal wars or friction between indigenous people and migrants. Because differences are beautiful, and peace is a relief. Harmony between people in Papua must be maintained so that it is always conducive.