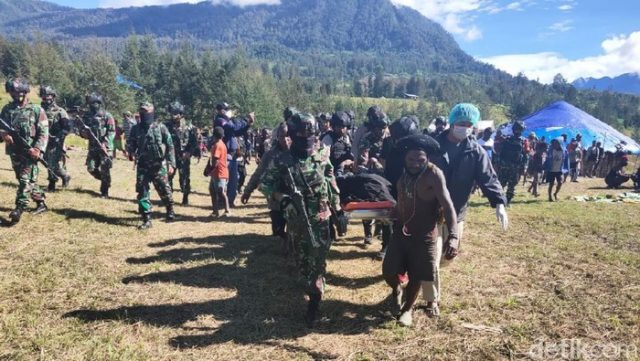 Deputy Chairman of the MPR from the Democratic Party faction, Syarief Hasan, expressed deep sorrow and was deeply concerned about and deplored the occurrence of terror and violence. Even the Armed Criminal Group (KKB) action in Papua has led to sadistic killings and has not ended yet.

The most recent incident on Wednesday (April 14, 2021), teachers, motorcycle taxi drivers and the houses of local DPRD members were victims. Of course, this violence can no longer be tolerated. Syarief Hasan also asked the government to take firm action as well as evaluate the policy for handling KKB in Papua.

According to Syarief, it is time for the government to think about various extraordinary policy scenarios in response to the heinous actions of the KKB that never end. Even though the allocation of the special autonomy fund (autonomy fund) has reached Rp. 127 trillion by 2020, there are certain things that must be evaluated in response to problems in Papua.

Therefore, Syarief assessed that the government needs to evaluate its policies more thoroughly. Will the government in addition continue to use economic instruments, and take firm action on the condition of public order and security due to acts of terror and heinous acts by armed criminal groups against the people in Papua.

Both of these policy options have not been successful, even the KKB’s acts of terror and crime are increasing to a scale that is dangerous for the integrity of the Republic of Indonesia.

In the domestic context, the affirmation of the status of the KKB is clearly the Armed Criminal Group which provides legality and law to the Police which can be assisted by the TNI in overcoming violent terror and killings against civilians in Papua.

As for the world’s public attention to the settlement of Papua, it is one of the tasks of the Government (Menlu) to carry out effective diplomacy in various international forums.

The Papua problem is indeed multidimensional and involves many factors, so the solution must also be integrative and comprehensive. However, according to Syarief, the government should not be quickly defeated by the KKB’s heinous actions that terrorize civilians.