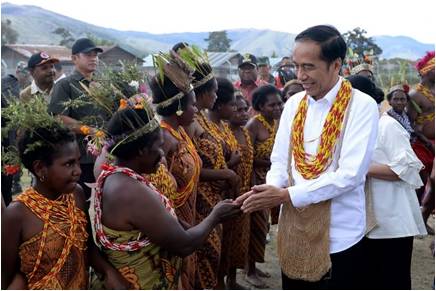 Observer of Papua issues and Director of the Institute for Peace and Security Studies (IPSS), Sri Yunanto, emphasized that the specialties contained in Law (UU) No. 21 of 2001 concerning Special Autonomy (Otsus) for Papua Province and Law no. 35 of 2008 is a manifestation of the government’s concern for the people in Papua.

He considered that since the enactment of the Special Autonomy Law in Papua, there have been several privileges for the community, one of which is by participating in politics. The realization is by being given the freedom to form political parties.

“The love of the central government for Papua, there is a special political right, that is, being able to create a political party (parpol) itself”

So those who want a referendum, create a party here, because a political contract like Otsus cannot be canceled unilaterally.

The efforts to achieve prosperity were also welcomed by the 13 tribal heads of the Central Highlands who are members of the Central Mountain Family Rukun Keluarga (RKPT) in Keerom Regency, Papua. The head of the RKPT tribe stated his support for Otsus volume II because the acceleration of development was already good. However, it still needs maximum efforts so that equity can reach remote areas.

Meanwhile, related to the discussion of opening up a space for dialogue which has been demanded by various parties, has been carried out by the government through the birth of the Special Autonomy Law (Otsus) for Papua. However, this does not close the opportunity to continue to open negotiations and discussions between the government and several other parties, especially indigenous Papuans.

According to Sri Yunanto, the government is considered to still have to continue to open space for dialogue but still limit the topics discussed so as not to get out of the main focus, namely the welfare of the community. There are boundaries that cannot be dialogued, there is strengthening of the Republic of Indonesia, safeguarding Pancasila, and the 1945 Constitution, there should not be a different dialogue, that is destroying a political contract.

This at the same time broke the opportunities for those who wanted a referendum. Sri Yunanto reminded these elements not to obstruct the implementation of the Special Autonomy policy towards Papua.

The lecturer at the Faculty of Social and Political Sciences, University of Muhammadiyah Jakarta, also recommended that those who want a referendum, especially those abroad, should form a political party (parpol) if they want to channel their aspirations. Given, the Papuan people have been given the privilege of forming political parties.

Until now, the government through the Coordinating Minister for Political, Legal and Security Affairs (Menkopolhukam) Mahfud MD continues to carry out dialogues with Papuan leaders including religious figures who are known to have important roles.