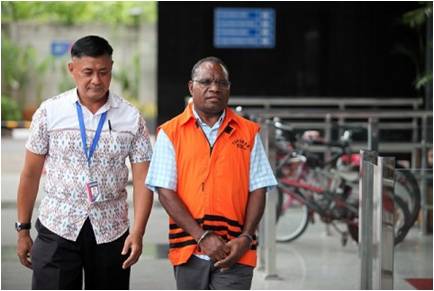 The Deputy Attorney General for Special Crimes at the Attorney General’s Office, Ali Mukartono, admitted that he had submitted hundreds of cases of suspected corruption during the Papua Special Autonomy (Otsus) policy.

This data has been submitted to the Special Committee (Pansus) of Special Autonomy for Papua during a joint meeting with the Attorney General’s Office, the National Police and several other related parties on Thursday, 27 May 2021.

He said the data was requested by the DPR as an evaluation material whether the Papua Special Autonomy was effective or not. However, Ali has not been able to specify how much the state has lost and the number of cases that have been handled.

It is known that Ali Mukartono was asked by the Coordinating Minister for Political, Legal and Security Affairs (Menko Polhukam) Mahfud MD to conduct an investigation into allegations of misappropriation of the Papua and Aceh special autonomy funds (Otsus).

In fact, it is not only the Attorney General’s Office that is briefed by Minister Mahfud to investigate suspected cases of corruption related to the management of special autonomy funds in Papua and Aceh. However, all law enforcement officials should work together.

Meanwhile, many parties have asked the government to take firm action against individuals who misuse the special autonomy funds or Papua’s Special Autonomy.

“There needs to be a more serious deepening of the Papua Special Autonomy, because the money flowing in the two provinces is very large”

A similar sentiment was also conveyed by members of the Special Autonomy Special Committee for Papua, Heru Widodo. He assessed that there were various problems that caused the special autonomy fund not to be enjoyed by many Papuans. According to the politician from the National Awakening Party (F-PKB) faction, it is necessary to strictly enforce the law on corruption cases if proven to occur in the two provinces.

The hope is that with such a large special autonomy fund, Papua will be able to at least catch up with progress like other regions. For this reason, Heru emphasized the need for tight control over the implementation of each regional government to minimize corruption.