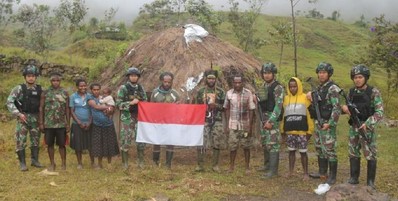 The KKB members began to surrender one by one. They did so without a da coercion from anyone, including the police. If someone surrenders, they will not go to prison and are instead protected by the TNI. Expected right , there will be many more members who are aware of KKB and returned to the bosom of the Homeland.

The KKB is a separatist organization that has just been claimed to be a terrorist. They have been troubled and have committed various crimes, as well as terror against the Papuan people. No wonder when they are declared a terrorist organization, civilians approve of it. However, the KKB actually burned its beard and became increasingly frenetic in the attacks.

However, there was good news when 3 members of the KKB, who were subordinates of Lekagak Telenggen, voluntarily surrendered to members of the TNI and Polri. After surrendering themselves, they will not be thrown into prison. In fact, it will get protection from the authorities.

The Head of Penum for the Public Relations Division of the National Police, Kombes Ahm ad Ramadhan, stated that this protection was given because other members of the Lekagek Telenggen troop might not like to carry out attacks. In the sense that if there are officers who guard them, they will avoid new conflicts and wars between members.

So, people don’t have to worry. Because this protection does not mean that ex-KKB members are privileged, but for humanitarian reasons. Because they are aware and willing to return to the bosom of their motherland, they must be rewarded for their efforts and courage.

They were indeed members of the KKB who often committed crimes. However, after surrendering and running from their troops, they realized and repented not to repeat their actions. God alone is willing to accept the repentance of sinful humans, let alone fellow humans.

Besides, when they were about to leave to surrender themselves, it was actually a very high risk. Because if other KKB members find out, they will not hesitate to fight, even shoot, so that they can cancel their intention to go to the TNI or Polri headquarters. No wonder their courage should be given appreciation in the form of protection.

Kombes Ahmad continued, this protection is certainly accompanied by supervision and guidance. In that sense, there would be no space for them to run away and trick the authorities by pretending to surrender. Whereas the aim is only to steal firearms or other items belonging to members of the police or TNI.

So people don’t have to be afraid when they read the news about KK B members who surrendered, because they will still be under surveillance secretly. Either through the apparatus or CCTV cameras. It’s not that you don’t believe it, but just in case, don’t let anything negative happen afterward.

The community also does not have to worry if any KKB members surrender, because they will certainly not return to terrorizing civilians. Because the TNI and Polri will conduct very intensive training, so that they will truly repent and have a high sense of nationalism.

We are obliged to think positively and feel happy when there are KKB members who surrender, because God has knocked on the door of their hearts to immediately repent. Because they are aware that their actions are very wrong, and criminal actions are very detrimental to others. Especially for women and children who are often victims.

Hopefully after 3 KKB members who fled, it will be followed by other friends. So that their numbers dwindled and then just dispersed. In this way, no KKB will terrorize the community and make life in Papua uncomfortable, with threats and propaganda.