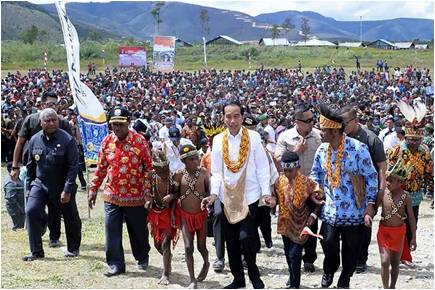 MPR Chairman Bambang Soesatyo revealed that the special autonomy funds (Otsus) and additional infrastructure funds (DTI) distributed by the central government for Papua and West Papua reached Rp. 138.65 trillion. This figure is based on data from the Ministry of Finance for the last 20 years (2002-2021). Meanwhile, in 2005-2021, transfers to regions and village funds (TKDD) to the provinces of Papua and West Papua reached Rp 702.3 trillion.

On the other hand, the size of the budget must also be balanced with a measurable monitoring and evaluation process so that the value of the benefits of the large budget can lead to improving the welfare of the people of Papua and West Papua.

The chairman of the 20th MPR explained that, referring to the presentation of the Papua Provincial Government delegation received by the FOR PAPUA MPR leadership on May 20, there were several successful records of the implementation of the Otsus policy in Papua. These include increasing growth in new autonomous regions, significantly increasing infrastructure development, and the birth of various policies that are beneficial and have a positive impact on the people’s economic sector and regional development.

Behind these achievements, there are still some unfinished homework. Based on BPS data released in February 2021, the provinces of Papua and West Papua are the two provinces with the highest poverty rates, at 26.8% and 21.7%, respectively. Added to this are the problems of distribution of development that have not been optimal, the level of income of indigenous Papuans is still low, and limited access to education and health.

The Deputy Chairperson of the Golkar Party explained that, therefore, the revision of Law Number 21 of 2001 concerning Special Autonomy for Papua must provide answers and provide alternative solutions needed. So that it can solve the various unresolved problems.

Periodic evaluation of the implementation of the Special Autonomy Law is very important, as mandated by Article 78 of the Special Autonomy Law. Through evaluation, we can measure effectiveness, accountability, output, and more importantly whether it has really provided an optimal impact on the lives of the people of Papua and West Papua as beneficiaries.

The general chairman of the Indonesian Motor Association (IMI) emphasized the acceleration of infrastructure, efforts to encourage investment, the opening of industrial areas, and various physical-material developments are only some of the elements. Because development must not forget the subject and object of development, namely human resources.

Therefore, said Bamsoet, it is a joint task to strive for the revision of the Papua Special Autonomy Law to truly represent the alignments of all stakeholders.

Given that development is a continuous process, the essence of development must lead to the welfare of the people. Advancing and prospering all Indonesian people, including those in Papua and West Papua, is a constitutional mandate that must be realized through joint efforts.