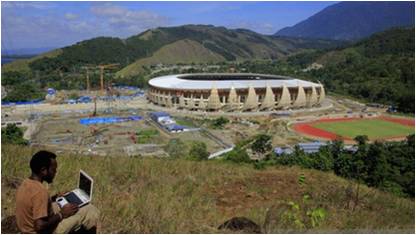 The Indonesian government has prioritized accelerating the development of the welfare of Papua and West Papua. In the second term of President Jokowi’s administration , the welfare approach will be a top priority .

Although the construction of k esejahteraan for Papua and Papua Barat  still be a challenge big , because the uniqueness of the area geography , background behind the people , the condition of nature , and the factors are mutually combined . But the challenge that not be a hindrance to the administration of President Jokowi is clear insists will prioritize the approach to the welfare of d i two provinces of Papua and West Papua .

The approach that is poured into instructions for the President ( Presidential Decree ) No. 9 Year 2020 on Accelerating the Development of Welfare in the province of Papua and West Papua is an effort the government to accelerate development in the land of Papua in order to align with the province of others to provide a bond that strong that five framework new for Papua can be implemented .

All five are accelerating the development of human resources, transformation and development of the economy are of quality and equitable , development of infrastructure , improvement and preservation of the quality of neighborhood life and reform the bureaucracy .

“The Government of Indonesia Priority acceleration of the development of the welfare of Papua and West Papua- Minister Coordinator of fields Development of Man and Culture, Muhajir Effendy”

Based on the data Central Bureau on Statistics (Biro Pusat Statistik or BPS) in 2020, the average length of school in West Papua is still much higher than the Papua namely West Papua amounted to 7.60 while Papua amounted to 6.69, but the average nationwide was much in it that is 8.48 . Access to water sources is still low for Papua and West Papua, namely 79.69 percent for West Papua, 62.7 percent for Papua while the national average is 90.21 percent .

The Indonesian government continues to strive to improve the welfare of the Papuan people . From the aspect of education , do program development curriculum that is contextual in order to conform with the excellence and wisdom that exist in Papua and West Papua, and program additional quota of teachers in Papua and West Papua .

The policy to accelerate the development of the welfare of Papua and West Papua is proof of the seriousness of the government . Thus becoming the best to build Papua, both in physical as well as a source of power human . By because it p roses construction that is already running , should continue to be implemented and is believed to be the welfare of the people of Papua. Invites the entire components of the nation to unite to build the Earth Cendrawasih so prosperous and advanced , keep spirit and mutually work together to become great .