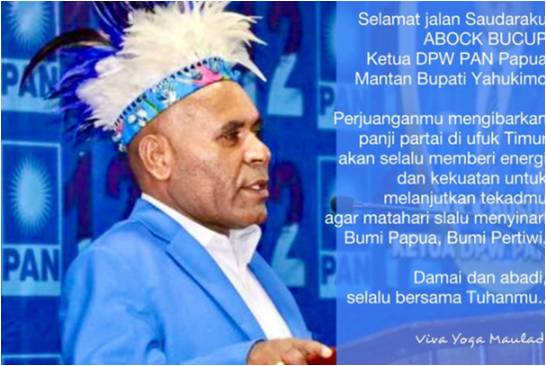 Sad news was heard from the National Mandate Party (PAN), this time the Chair of the Papua Province PAN who was also the former Yahukimo Regent, Abock Bucup died on Sunday (3/10/2021) night.

This sad news was also conveyed by the General Chairman of PAN Zulkifli Hasan. In his tweet, Zulhas said that PAN had lost its best cadre.

“PAN has once again lost its best cadre. Our comrade in arms, the chairman of the Papuan PAN DPW, my brother Abock Busup, has passed away due to illness. On behalf of the PAN family, I express my deepest condolences. May the family left behind be given patience & fortitude,” he tweeted.

“Your struggle is to raise the party’s banner on the eastern horizon so that the sun shines on the Earth of Papua,” said Viva Yoga.

On one occasion, he explained, Abock Busup had been in Jakarta for two days. He went to the capital city to take care of the SK DPD PAN to the DPP PAN office, and will follow the Technical Guidance for PAN Legislative Members throughout Indonesia..

The Head of the Public Information Bureau of the Public Relations Division of the National Police, Brigadier General Rusdi Hartono explained the chronology of the death of former Yahukimo Regent Abock Busup which sparked chaos in Yahukimo, Papua.

Rusdi said, Abock Busup transited at a hotel in Jakarta to attend activities in Bali. On the morning of October 3, 2021, a hotel clerk named Taufik Ismail knocked on Abock Busup’s door, but there was no answer.

“The person concerned contacted his friend, Ridwan, who reported that there was no response from room 1707. Therefore, the two hotel officers then informed the victim’s colleague, namely Yipwa who spent the night in room 1725. These three people headed to room 1707,” said Rusdi at Police Headquarters, Jakarta, Monday (4/10/2021). Next, Abock Busup’s room was opened manually from the outside.

There were no signs of violence on the victim’s body. In addition, no other suspicious objects or drugs were found in the room. Abock Busup was taken to the Meilia Cibubur Hospital at around 11.00 at local time.

The police immediately came to the hotel to conduct a crime scene and collect evidence at the location. The police also came to Meilia Hospital. Rusdi stated, based on the doctor’s statement, Abock Busup had died when he arrived at the hospital or death on arrival.

“There were also no signs of violence around the victim’s body and also no other objects, drugs and so on,” he said.

After that, the police coordinated with the family. However, the family refused an autopsy on Abock Busup’s body. According to Rusdi, the family believes that the cause of Abock Busup’s death is a natural thing. “The family has accepted this event as a fate,” said Rusdi.

Rusdi also asked Yahukimo residents not to be provoked by hoax information about Abock Busup’s death. “The most important thing is that the people in Yahukimo are not provoked by untrue issues. The problem is being handled by the Papuan Police and continues to coordinate with the Metro Jaya Police,” he said. (CN Cendrawasih News)