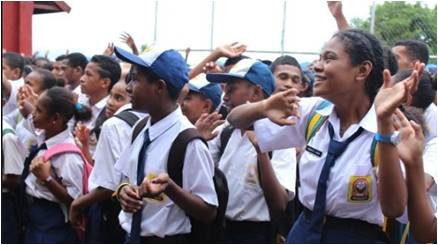 Before the implementation of Special Autonomy (Otsus) in 2001, development in Papua was very behind. Now, Otsus is believed to have changed the face of Papua for the better.

This was stated by Ondofolo or the traditional leader of Sereh Sentani Village, Jayapura Regency, Yanto Hiyo Eluay. Yanto highlighted the budget issue that Papua had before the Special Autonomy Region.

Previously, the level of development and welfare in Papua was really very low before the existence of Otsus. The factor of inadequate APBD funds in provinces, cities and districts. Also bad PAD and unmanaged natural resources, make Papua worse off than other regions.

The Chairperson of the Presidium of the Men and Women of the Pepera Fighters (P5) of Papua Province gave an example of the development of infrastructure and infrastructure in Papua. Development has stalled because there is no budget.

We must see that development costs money. Enjoying education, health facilities, roads, opening up an isolated area, all of these require money, and these are all available when there is Otsus.

According to Yanto, now Otsus has made many changes. Yanto highlighted the oblique accusations against Otsus that have been running for the last 20 years.

Once there was Otsus, there were lots of changes, progress in Papua. Infrastructure, hospitals, health facilities, road construction and so on.

However, in the implementation of Otsus, Yanto admitted that it was not optimal. Yanto still found many shortcomings that had to be fixed.

Yanto proposed the formation of a special ministry-level institution to manage Otsus in Bumi Cenderawasih. Yanto believes this can maximize the implementation of Otsus at the grassroots.

Yanto suggested that the special autonomy fund should be managed directly by a ministry-level institution. Then they have to meet directly with the people in the villages. Yanto is sure that the Red and White flag will fly all over Papua.