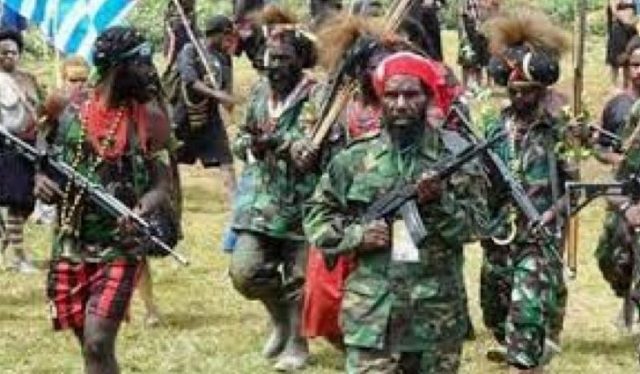 The Papuan Separatist Terrorist Group (KST) continues to carry out acts of terror. People in Papua are tired of all the brutality that only creates fear for people in Papua.

Not only attacking civilians, KST also launched its attacks on TNI soldiers, on January 27, 2022, three personnel of the YR 408/Sbh Kodim Task Force were killed due to attacks from KST.

KST Papua terrorists attacked the TNI post located in Bukit Tepuk, Jenggernok Village, Gome District, at around 05.00 WIT this morning. The attack occurred when the officers were changing the guard shift. The sudden attack made fire contact unavoidable. Private Sergeant Rizal Suffered a gunshot wound in the lower abdomen. However, when they arrived at the Puskesmas, Serda Rizal and Pratu Tuppal Baraza were declared dead.

Previously, National Police Chief General Listyo Sigit Prabowo had asked members of the National Police and TNI Soldiers to be aware of threats from KST, whose activities often disturb civil society in Papua.

Our memories have not forgotten about KST’s brutal behavior that once caused a hole in the wing of the smart air plane on the left. As the plane was about to fly back to Oksibil, it experienced repeated fire attacks.

It is known that the Smart Air plane flying from Timika to Kiwirok piloted by Guntardi was carrying food and three passengers from the security forces. The former Papuan Police Chief, Inspector General Paulus Waterpauw, said that KST is a group of people who often group together and carry out security disturbances.

Paulus emphasized that he always categorizes KST as a free man. His life is just violence, frightening everyone, threatening everyone with guns.

f course the atrocities committed by KST, which used to be called KST, can no longer be tolerated. The state must also act or act immediately. So that the death toll among the Papuan people will no longer fall, the state must act decisively and measuredly.

When the state acts decisively and KST members surrender, they must be faced with legal processes to account for the armed violence they have committed so far. On the other hand, if the state’s decisive action was responded to by a deadly armed attack by KST, it would not be wrong if the TNI-Polri soldiers also launched a counterattack in the name of defending the country and protecting all the blood spilled.

The existence of KST in Papua with all its evil actions so far must have caused endless fear for local residents. It is not wrong if Papuans are inflamed and express their jealousy towards their fellow countrymen and countrymen in other regions who are allowed to enjoy the dynamics of normal life without being afraid of a sudden attack from KST.

Kapendam XVII/Cenderawasih Colonel Inf Aqsha Erlangga in Jayapura said the arson took place at 11.59 WIT, to be precise in Jenggernok village, Gome district, Puncak regency. The arson by KST was triggered because Koname Murib asked for assistance from the TNI Task Force to repair waterways to residents’ houses which were cut off by KST.

Not accepting this action, the KST mob immediately set fire to the honai building belonging to a person named Koname Murib. It should be noted that for the umpteenth time, the KST gang carried out acts of terror against the public. Until now, the community is on guard to anticipate the follow-up action.

If KST is upset because they see the TNI repairing waterways, of course we know how KST is a group that is not happy if the Papuan people can get services from the government.

The burning of schools, burning of health centers, shootings of civilians and officers are some of KST’s actions that cannot be tolerated. After all, people in Papua and West Papua have the right to a safe and comfortable atmosphere while in Papua.

KST must get a legal process for his actions that often interfere with the conduciveness of development on the earth of Cenderawasih.