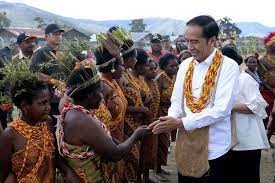 So far, many parties have said that the Government is ignorant of the aspirations of the Papuan people in terms of discussing special autonomy and regional expansion. However, President Jokowi answered the accusation, who wanted to meet the leaders of the Papuan People’s Assembly (MRP) and the West Papuan People’s Assembly (MPRB) on April 25, 2022.

Regarding the Papua Special Autonomy Law, Coordinating Minister for Political, Legal and Security Affairs Mahfud MD said Jokowi appreciated the steps taken by a number of parties to challenge the regulation to the Constitutional Court (MK).

“Earlier, the President answered, for example the Special Autonomy Law [Papua]. The law has been implemented, it has been ratified, now there are those who are examining the material in the Constitutional Court and we respect the legal process and we will follow it and of course in the end it will lead to a verdict. Mahfud said at a press conference.

Then, about the formation of a new autonomous region of Papua. Mahfud admits that there are pros and cons in the community regarding the discourse. Mahfud understands that not all government decisions are immediately approved by the whole community.

“The president explained based on the data that actually asking for expansion in various regions is a struggle. There are 354 requests for expansion and based on interests in Papua, we are filing for three provinces. West Papua instead asked for expansion,” he said.

This statement was made by Suharso in a meeting with the Chairman of the MRP, Tiumotius Murib and other representatives.

It is known that in September 2021, the MRP submitted a request for a judicial review of Law Number 2 of 2021 concerning Special Autonomy for Papua to the Constitutional Court. One of the articles being challenged relates to the authority to expand the territory in Papua.

Suharso agreed that the expansion in Papua must be open to the aspirations of local residents. He emphasized that the government is really realizing the welfare of the indigenous Papuans (OAP).

“I convey the seriousness of the government’s efforts to realize the welfare of indigenous Papuans. Welfare is one of the keys to realizing Papuan peace,” he said.