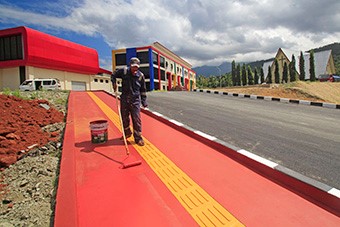 Responding to the pros and cons of the planned expansion of the region in Papua, the Chair of the Association of Central Highlands Regents of Papua who is also the Regent of Lanny Jaya Befa Yigibalom emphasized that the formation of the New Autonomous Region (DOB) or the expansion of Papua was not the struggle of the elites, but the desires and needs of the majority of the people who crave prosperity. According to him, the government as a state administrator also has the same desire, namely to seek the best for the citizens.

“We’ve all said that the presence of this province is the political will of the state, not the struggle of elites or anyone else, or the division team, no,” said Befa.

Befa explained that the expansion had been regulated by the state, so the people should accept it and use it as well as possible for the benefit of the people in Papua.

Befa also did not prohibit community groups from rejecting the division of Papua. However, he asked to continue to follow the decision in the Plenary Session of the DPR RI.

He also hopes that all intellectuals in Papua, especially in the Central Highlands of Papua, can welcome the Province of Papua in the Central Mountains. According to Befa, the emergence of pros and cons is a natural thing, but an assessment must be carried out as well as possible.

“As a good citizen, avoid all negative thoughts and welcome this well,” he said.

He added that the presence of a new province must be seen from a broader framework. Therefore, one should not think narrowly, let alone suspect each other or make scapegoats.

“However, it must be seen with a good eye, that the Central Government provides expansion for the development and welfare of the Papuan people,” he said.

For information, the Government has set a moratorium on the expansion of New Autonomous Regions (DOB) since 2014 until now. However, the issuance of Law (UU) No. 2/2021 on the second amendment to Law No. 21/2001 on Special Autonomy for Papua Province actually mandates the formation of new regions in the Papua region.