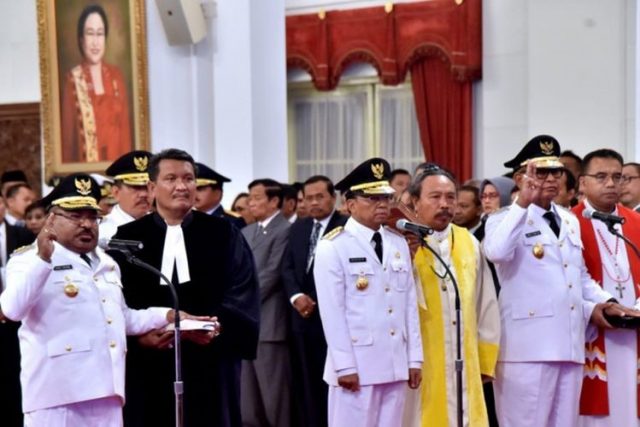 Papua Governor Lukas Enembe recently expressed his rejection of the planned expansion of Papua. According to him, the population of Papuans is too small to form a new autonomous region (DOB).

The Ministry of Home Affairs of the Republic of Indonesia (Kemendagri) in a release, stated that Luke’s refusal to invite controversy. This is because Lukas has repeatedly expressed his support for the realization of the division of the province in Papua during the gubernatorial election campaign (pilgub) several years ago.

In the 2018 gubernatorial election campaign, for example, Lukas welcomed the aspirations of his supporters who wanted to create a new province of South Papua positively. During the campaign, Lukas said he would fight for the formation of the South Papua Province after the central government lifted the moratorium on division.

“How can I not express the people’s desire for the province of South Papua? I am the leader of the expansion (Papua),” said Lukas as published in the release.

Thanks to this campaign, Lukas was re-elected as Governor of Papua for the second time. In July 2019, the Merauke Regency Government (Pemkab) followed up on Lukas Enembe’s promise by forming the South Papua Province Expansion Team (PPPS).

According to the Regional Secretary (Sekda) of Merauke Regency Daniel Pauta, Lukas had pushed for the division of a number of provinces in Papua, including South Papua during the campaign. This step aims to maximize the distribution of public services.

“During the campaign period, the issue of the expansion of (Papua) was always echoed by Lukas Enembe,” said Daniel. Meanwhile, in the same year, Lukas assigned the University of Cendrawasih to conduct a study on the expansion of the province in Papua. The study eventually resulted in recommendations for seven new provinces in Papua. In fact, the recommendations for the seven new Papua provinces have been disseminated by Lukas through various media.

In the 2013 gubernatorial election, the issue of the expansion of Papua was again campaigned by Lukas and the late Klemen Tinal who was deputy governor at that time. Member of the Regional Representatives Council (DPD) and Papuan community leader, Yorrys Raweyai, described Lukas’ support for the division of Papua which had been echoed since 2008. This he conveyed in a discussion forum facilitated by the Public Virtue Institute. According to Yorrys, a number of Papuan figures, including Lukas Enembe, had come to Jakarta to ask the central government for the realization of regional expansion.

“That’s Pak Lukas’ concept of Special Autonomy (Otsus) Plus. He came with all local governments and I facilitated (them) to the leadership of the Indonesian House of Representatives (DPR). His request (in the form of) district and provincial expansion, “said Yorrys.

Papuan issue observer Agus Kosek said a number of Papuan community leaders acknowledged that the victory of Lukas Enembe and the late Klemen Tinal in the 2013 Gubernatorial Election was inseparable from their promises to realize the division of Papua.

Agus Kosek stated that the attitude of Lukas who now rejects the division of Papua is seen as an attitude that has turned 180 degrees. According to him, Lukas is not able to lift and make his own people proud even though he has led Papua for almost 10 years.

“Lukas Enembe’s statement as well as the reason for rejecting the New Autonomous Region just because he feels that the Papuan People (OAP) do not have the capability and capacity to manage the new province is like a slap in the face,” said Kosek.