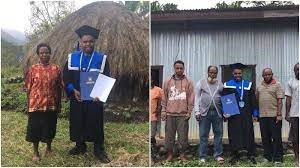 The chairman of the Jayapura Regency Religious Harmony Forum, Papua, Rev. Alberth Yoku said that religious leaders agreed and encouraged the expansion of the province in Papua, for the sake of realizing accelerated development, public services, community welfare, as well as elevating the dignity of the Papuan Indigenous People (OAP) by paying attention to aspects of politics, administration, law, and social unity. -culture, readiness of human resources, basic infrastructure, public capacity, future developments, and/or aspirations of the Papuan people.

“The establishment of new autonomous regions has an impact on welfare, justice and equitable development in all sectors”

However, there were some elements who protested against the division of the territory which was said to be carried out by Papuan students, it turned out that the masterminds and participants of the demonstration were separatist groups and the people who were provoked by these groups of human rights violators.

The Jayapura Youth Movement invites all youth, including Papuan students to unite, to accept the presence of the New Autonomous Region in Papua Province. The Papuan people really need the expansion for the expansion of services and the involvement and accommodation of all the interests of the Papuan people, to remote areas.

The leaders of the Doreri Tribe Indigenous People who are in Manokwari Regency with indigenous Papuan tribal leaders in the Domberai Customary Region III, West Papua have an agreement to provide support for the new autonomous regions that will be carried out in the Papua Region, they are very enthusiastic about the regional expansion that will occur in the Papua region. or DOB, because according to them, with the existence of this new autonomous region, the Papua Province can further develop and its development can be felt for all citizens of the Republic of Indonesia.

Regarding the formation of new autonomous regions in Papua, there are several important things that need attention, including geographical conditions, the area of ​​Papua, coastal areas, mountainous areas, regional isolation, demographic conditions, population, uneven population distribution, the development process of the Papuan people, and socio-cultural conditions of the community. Because with all the existing conditions, the aspirations for the formation of the Papua New Guinea can be considered as a priority for discussion in the next one to two years.

The main objective of the expansion and development of autonomy in the Papua region is to further improve public services, people’s lives and welfare. Then by bringing the community closer to the government, it is hoped that government management will be more effective and efficient.