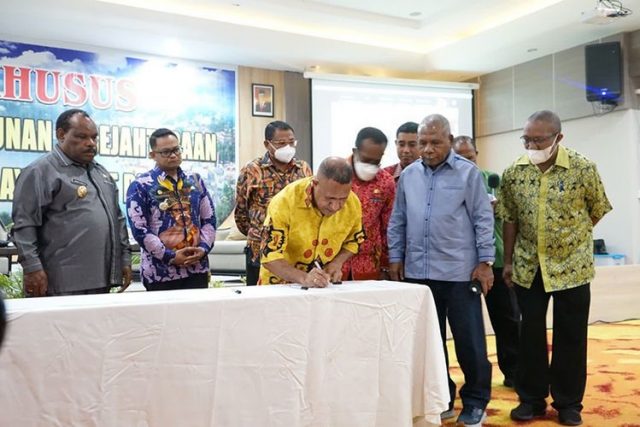 This support was conveyed after the Special Meeting for the Acceleration of Welfare Development in accordance with the Papuan Customary Territory which took place in a hybrid or online and offline manner from Suni Garden Lake Hotel and Resort Sentani, Jayapura Regency, Papua, on Friday (10/6/2022). The meeting was attended by various parties, namely the regents and mayors of Papua Province, the Papua Province Regional Leadership Coordination Forum (Forkopimda), the Papuan People’s Assembly, the Papuan People’s Representative Council (DPRP), as well as a number of related parties.

The special meeting then agreed on a number of matters relating to support for the division of Papua. The agreement was reached after the meeting participants listened to the input, aspirations, and wishes of the indigenous Papuan people, represented by regional heads as well as traditional, religious, women, and youth leaders. The agreement includes supporting and committing to implement the Special Autonomy (Otsus) policy for the Papua Province in accordance with Law (UU) No. 2 of 2021.

In addition, the meeting participants also agreed to support the acceleration of the development of the welfare of the Papuan Indigenous People (OAP) in accordance with the customary territory. Then, they also asked for the implementation of sectoral laws in Papua Province in accordance with Law Number 2 of 2021.

“(We) urge the central government and the House of Representatives (DPR) to immediately realize the formation of new autonomous regions (DOB) or the division of provinces and districts and cities in Papua Province.”

Not only that, the meeting participants also requested that the allocation of seats in the DPR and the Regional Representatives Council (DPD) from the Papua Province and the expansion province from Papua amounted to a minimum of five seats proportionally. In addition, the regent and deputy regent, as well as the mayor and deputy mayor must come from OAP. During the meeting, it was also agreed that regional heads, including community leaders, would form a cooperation forum to oversee the acceleration of welfare development in accordance with Papua’s customary territories.

Meanwhile, Head of the Forum for Regional Heads in Tanah Tabi and Sairei who also serves as Jayapura Regent Mathius Awoitauw appreciated the presence of a number of parties in the meeting. He considered that the meeting took place in a dynamic family atmosphere.

The participants looked so enthusiastic. This can be seen from a number of incoming aspirations. “We will continue to build communication. We ask for suggestions and input from Mr and Mrs associations, chairpersons, representatives, and stakeholders in all customary areas,” Mathius.