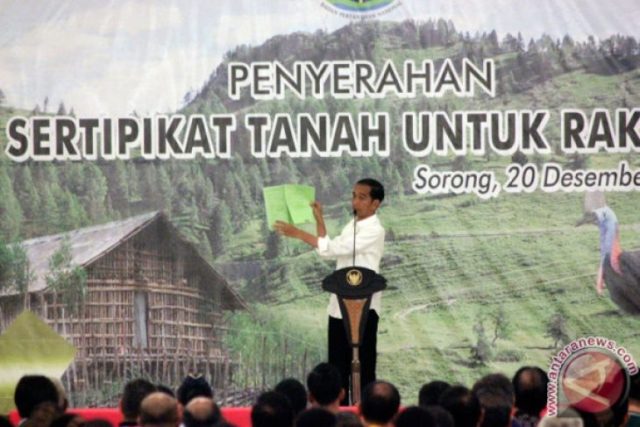 Sorong (ANTARA News) – President Joko Widodo (Jokowi) here on Wednesday distributed 2,568 land certificates to communities from the districts of Sorong and South Sorong and the city of Sorong in West Papua Province.

“Please, those who have received the certificate raise it up for I would like to see and count it,” the president remarked during a ceremony to distribute the certificates at the Aimas Convention Center Building, here.

President Jokowi highlighted the importance of ownership of land certificates to reduce land disputes that often occur in various regions.

“Every time I visit a region, there are always complaints of land disputes that reach my ear,” the head of state informed the recipients of the certificates who were present at the ceremony.

According to the president, a total of 15 million land certificates had been distributed in West Papua this year, and the number is expected to reach 40 million next year.

On the occasion, Minister of Agrarian Affairs and Spatial Planning and Head of the National Land Agency Sofyan A. Djalil revealed that currently, only 14 percent of the land had been certified.