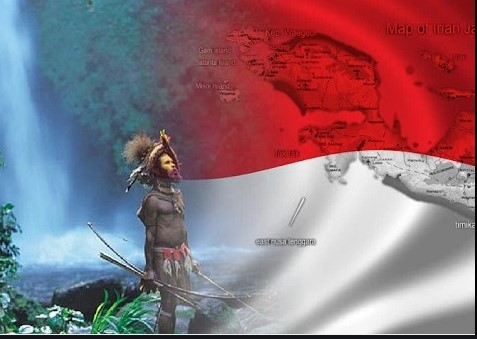 In historical records, the Morning Star flag is nothing more than Dutch colonial engineering in its efforts to continue the colonization of the Papua region so that it can continue to exploit its natural resources. However, in the Popular Opinion Determination (PEPERA) in 1969, the Papuan people chose to join Indonesia. Meanwhile, the international community legally acknowledges that Papua is part of the Indonesian State following the 1969 PEPERA decision.

If the Papuan people are not careful, they can be tricked like the Aborigines in Australia who were eliminated in the dream trick of the colonialists. The following is the narrative of the historical perpetrator of PEPERA, Ramses Ohee, whose family is also the perpetrator of the history of the 1928 Youth Pledge representing the people of Papua

In the footsteps of Ramses Ohee

Ramses Ohee, the son of the Head of Asey Besar Village, Sentani Onder Afdelling Hollandia District, Poroe Ohee and Orpa Pallo Yochu’s mother, who is better known as a figure of the 1969 Pepera warrior, has tasted a lot of salt acid, the bitterness of living from colonial times, struggles, the old order, the new order, until now it has entered the reform era.

The grandfather who was born in Asei Besar Village on October 10, 1931, from the descendants of Ondoafi or well-known traditional leaders at that time told the story of his life since studying, starting from the People’s School in 1942-1945, Jongen Vervolks School or the men’s continuing school in Yoka in 1946-1949 That until he took MULO education in 1951-1953 and completed an administration course in 1956-1957 at Dok V Jayapura.

Because of his skills and expertise, Ramses was appointed as the youngest member of the Hollandia Advisory Council, along with Markus Kaisepo, the proponent of the name Irian Jaya in 1959 until the transition of government from the Netherlands to the Indonesian Government. In the same year, young Ramses also became an announcer for Radio Omroep Nieuw Guinea (RONG) specifically for football news, which was currently rolling out the Voetbalbond Hollandia en Omstreken (VHO) league or the nearby Hollandia Football Association (Jayapura) or also called by other names. , Voetbal Bond Hollandia (VBH).

However, previously since July 1, 1954, Ramses had served as a clerk at the provincial health office in the pharmaceutical section of Jayapura, then continued to climb to become Hoofd Administrator at the same service in the eradication of malaria, starting from September 1, 1962. Then based on the SK Governor KDH West Irian dated March 31, 1964, served as Administrative Assembler in the pharmaceutical equipment and supervision department until he chose to resign honorably on November 1, 1967.

“I had to resign because I had to continue my leadership as an ondoafi in Asei Besar village. And since resigning, I have attended various courses and exercises including training for cadres on December 5-19, 1964 in Sentani, training for cadres in West Irian development for three months in Jakarta. “In 1969, training for fishermen cadres in 1974, fast village pamong 1977 course, fast pamong village training course for Dati II Jayapura 1981, upgrading the LMD, training on legal counseling for village officials in 1989, and attending training courses for village community development counseling in 1990,” he said.

Meanwhile, in the organizational field, said the grandfather of eight siblings, he had served as Chairman of the Rukun Tani Indonesia in the SOKSI XXV Irian Jaya organization in 1970, served as Chair of the Irian Jaya Customary Technical Division at LMA Irian Jaya in 1998 and advisor to LMA Port Mumbai, Jayapura City in 1999. Since 1970, assisting Korem 172 / PWY and especially Kodam XVII / Trikora in the public sector during the period of restoring security.

“I also participated in determining the liberation of West Irian from Dutch colonialism and returning to the bosom of the motherland (NKRI) during the 1969 Act, along with 1,025 delegates at that time. I received a certificate of appreciation from the president,” said the former member of the Jayapura Regency DPRD Dati II period. 1992-1997 and 1997-1999.

“So, my message to the younger generation, fill this independence with positive things for personal, because other successes will follow by themselves. You don’t need to be provoked by other people’s oblique invitations, which may not necessarily change your future, because your success will come. it’s on your shoulders, not someone else, “said Ramses who claimed that his parents were Papuan representatives at the Youth Pledge on October 28, 1928, who at that time joined the Sultanate of Tidore and Ternate.

The History of Papua within the Republic of Indonesia is Correct

According to Ramses, the history of the entry of West Irian (Papua) into the territory of the Unitary State of the Republic of Indonesia (NKRI) is correct so there is no need to be questioned and tampered with. This was expressed by the figure of Papuan fighters, Ramses Ohee in Jayapura, on Thursday in response to some groups who were still questioning the history of Papua’s entry into Indonesian territory which had been determined through the Determination of People’s Opinion (Pepera) in 1969.

Ramses emphasized that there are parties who deliberately distort the history of Papua to maintain conflict in the Land of Papua. “The history of Papua’s entry into the Republic of Indonesia is correct, it’s just that it has been distorted by a certain number of citizens, mostly the younger generation,” he said.

He further explained that historical facts show the desire of the Papuan people to join Indonesia since the implementation of the Youth Pledge, October 28, 1928. “Unfortunately, there are still those who think that the Youth Pledge was not attended by Papuan youths. This is wrong because, on the contrary, Papuan youths are present. and pledged with youth from other regions. My father, Poreu Ohee, was one of the Papuan youths who were present at that time, “said Ramses.

As for the parties who distort history and still deny the fact of the integration of Papua into the Republic of Indonesia, Ramses does not blame them for their lack of understanding of this matter.

According to him, what needs to be realized is that the existence of the state is a gift from God Almighty so that it should be grateful for making a positive contribution to development in Papua.

Based on historical records, on October 1, 1962, the Dutch government in West Irian handed over this area to the United Nations (UN) through the United Nations Temporary Executive Authority (UNTEA) until May 1, 1963. After that date, the Dutch flag was lowered and replaced by the Red and White flag and the UN flag.

Subsequently, the United Nations drafted an agreement known as the “New York Agreement” to provide an opportunity for the people of West Irian to conduct a poll through the Act in 1969 which was represented by 175 people as representatives from eight districts at that time.

The results of the Pepera show that the people of West Irian agree to unite with the Indonesian government.

Impact of Progress After the Extension of Special Autonomy for Papua | by Fathur P.

New Directions for the Implementation of Papua’s Special Autonomy | by Renno P.

Impact of Progress After the Extension of Special Autonomy for Papua...

New Directions for the Implementation of Papua’s Special Autonomy | by...

Optimism for Papuan Development Through Sustainability of Special Autonomy for Papua...