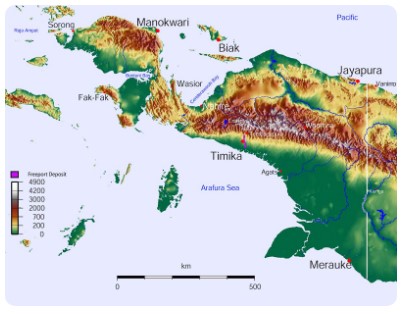 Papua is in the easternmost region of Indonesia. It is the second-largest island after Greenland Island in Denmark. The area reaches 890,000 km2 (if combined with Papua New Guinea). The size is estimated to be nearly five times the area of ​​the island of Java.

Around the end of 500 AD, the Chinese were given the name Tungki. This was discovered after they discovered a diary of a Tiangkok author, Ghau Yu Kuan, which described the origin of the spices they obtained from Tungki, the name used by Chinese traders at that time for Papua.

Furthermore, at the end of 600 AD, the Sriwijaya Kingdom mentioned the name Papua by using the name Janggi. In the book, Kertagama 1365 written by Pujangga Mpu Prapanca “Tugki” or “Janggi” is a misspelling obtained from a third party, namely Chinese Trader Chun Tjok Kwan who during his trading trip had stopped in several places in Tidore and Papua.

In early 700 AD, Persian and Gujarati traders began to arrive in Papua, including traders from India. They aimed to find spices in this region after seeing the success of Chinese traders. These traders call Papua’s name Dwi Panta and also Samudranta, which means the Edge of the Ocean and the End of the Ocean.

At the end of 1300, the Majapahit Kingdom used two names, namely Wanin and Sram. The name Wanin, of course, is none other than the Onin peninsula in the Fak-Fak and Sram areas, which is the island of Seram in Maluku. The slaves possibly brought and presented to Majapahit came from Onin and those who brought him there were Seram people from Maluku, so these two names are mentioned.

Around 1646, the Kingdom of Tidore gave the island a name and its inhabitants as Papa-Ua, which had changed its name to Papua. In the Tidore language, it means not joined or not united (not integrated). In Malay, it means curly hair. Having another understanding, that on this island no king rules.

Some use the name Papua as a form of ridicule towards residents — primitive, left behind, stupid people — which is a slogan that does not have any meaning with the name Papua.

The population response to the name Papua is quite good. The reason is that the name truly reflects their identity as a black, curly human, which is very different from the Malay population as well as the Tidore kingdom. But, of course, they do not accept the ridicule that the immigrants always make.

In 1511, Antonio d’Arbau, a Portuguese sailor, called the Papua region “Os Papuas” or also llha de Papo. Don Jorge de Menetes, a sailor from Spain also stopped by in Papua a few years later (1526-1527), he still uses the name Papua. He knows the name Papua in the diary of Antonio Figafetta, the clerk for the Magelhaens voyage around the world, calling him Papua. The name Papua was known to Figafetta when he stopped on the island of Tidore.

Next, in 1528, Alvaro de Savedra, a leader of the Spanish fleet, named the island of Papua Isla de Oro or Island of Gold which means the Island of Gold. He is also the only sailor who has successfully anchored his ship on the northern coast of the Papua archipelago. With the mention of Isla Del Oro, many European sailors also flocked to look for the gold found on this golden island.

In 1545, Spanish sailor Inigo Ortiz de Retes gave the name Nueva Guinee. In English, it is called New Guinea. He initially walked along the north coast of this island and because he saw the characteristics of human beings who were black-skinned and curly-haired just like the humans he saw in the African hemisphere named Guinea, he was given the name of this island Nueva Guinee / New Guinea Island.

IRIAN means “Joining the Republic of Indonesia against the Netherlands”

The names Papua and Nueva Guinea were retained for almost two centuries, only then did the name New Guinea from the Netherlands appear, and the two names were widely known throughout the world, especially in the 19th century. The people of the archipelago are familiar with the name Papua and while the name New Guinea became famous since the 16th century after this name appeared on the world map so that it was used by the outside world, especially in European countries.

In 1956, the Dutch again changed the name Papua from New Guinea to Nederlands New Guinea. The name change was more of a political nature because the Dutch did not want to lose the island of Papua to Indonesia at that time.

In the 1950s, Resident JP Van Eechoud formed the Bestuur school. There he recommended and ordered Admoprasojo as the Director of the Bestuur School to form a tribal council. One of the activities in this council examines the history and culture of Papua, including changing the name of the island of Papua to another name.

The follow-up was a meeting in Tobati, Jayapura. The idea of ​​changing the name was also discussed, a committee was also formed which would later be tasked with tracing a name that originated from the Papua region and could be accepted by all existing tribes.

Frans Kaisepo as chairman of the committee then took a name from the myth of Manseren Koreri, a legend that is well-known and widely known by the wider Biak community, namely Irian.

Officially, on July 16, 1946, Frans Kaisepo, who represented New Guinea in a conference in Malino-Ujung Pandang, through his influential speech on national radio broadcasting, changed the name Papua and New Guinea to the name Irian.

The name Irian is a name that has a political meaning. Frans Kaisepo once said, “The change in the name Papua to Irian, unless it has a historical meaning, also contains the spirit of struggle: IRIAN means Joining the Republic of Indonesia against the Netherlands”. (1969 PEPERA Book published in 1972, pp. 107-108).

After Indonesia’s independence in 1945, and the Dutch increasingly cornered by the international community to defend Papua within its colonies, on December 1, 1961, the Netherlands formed a puppet state of Papua. On that date, the Dutch ordered the Papuan people to fly a new national flag called the Morning Star. They set the name Papua as West Papua.

Subsequently, the name Irian was changed to West Irian officially since May 1, 1963, when this territory was returned from the Kingdom of the Netherlands to the territory of the Republic of Indonesia. In 1967, the PT Freeport Mc Morran cooperation contract with the Indonesian government was concluded. In this contract, Freeport uses the name West Irian, whereas Papua has not officially become part of Indonesia.

The international community legally acknowledges that Papua is part of the Indonesian State after the Popular Opinion Determination (PEPERA) was carried out in 1969.

And then on March 1, 1973, according to regulation Number 5 of 1973 the name West Irian was officially changed by President Soeharto to the name Irian Jaya.

Entering the reform era some people demanded the name change from Irian Jaya to Papua. President Abdurrahman Wahid fulfilled the request of some of the community. During the President’s official state visit, as well as welcoming the change of the new year from 1999 to 2000, on the morning of January 1, 2000, he announced that the name Irian Jaya was then renamed Papua as given by the Tidore Kingdom in the 1800s.

Appreciating the Acceleration of Welfare Development in Papua | by Windy Putri

The Government of Indonesia’s Efforts to Accommodate the Interests of the Papuan People through Special Autonomy for Papua | by Terry P.

Appreciating the Acceleration of Welfare Development in Papua | by Windy...

The Government of Indonesia’s Efforts to Accommodate the Interests of the...

Supporting Law Enforcement Efforts for Security Stability in Papua | by...

Supporting the Expansion of the Papua Region to Improve the Welfare...

Papua is an integral part of the Republic of Indonesia, Rejects...